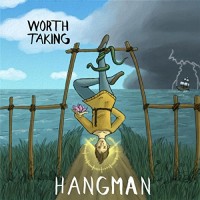 When talking about the â€œemo revival,â€ sites like Pitchfork reference bands both emotionally charged and hipster approved. But thereâ€™s another emo revival taking place as well, one of the pop punk variety. Worth Taking is part of that resurgence.

Hangman, their sophomore album, sounds like the transition from late 90â€™s emo into early 2000â€™s pop punk. There were a whole slew of bands that never achieved the success of a Jimmy Eat World or a Taking Back Sunday. Bands like American Hi-Fi or Allister understood punk music but distilled it, adding sugary goodness for mainstream appeal. If Sugarcult and 90â€™s alt rockers Lit had a baby in the form of a vocalist, it would be Worth Takingâ€™s Jerod McBrayer. These are the songs every young Offspring fan wrote after hearing Fall Out Boy for the first time.

Lyrically, Worth Taking deals with the same old subjects: love, failure, heartbreak, addiction. â€œIâ€™ll keep moving forward, try to enjoy the rideâ€ and â€œThis one's for you, this one's for us, this one's for shaking off the dust,â€ read stale in type. But much like, say, Man Overboard, McBrayerâ€™s words succeed on your ability to repeat them back. Theyâ€™re incredibly relatable because theyâ€™re universal. Maybe too much so. Worth Taking make big songs with big hooks, and they will get stuck in your head. â€œI Canâ€™t Believeâ€ is the most pop punk song on an album full of them. Its vocals are catchy, itâ€™s bass harmlessly available, and its guitar bridge builds to a final chorus. Itâ€™s a formula that has worked for years and continues to do so on these twelve songs.

Hangman gives me nostalgia for an unspecified band from 2002 Iâ€™ve never heard before. It sounds like a late career album from your favorite band past its primeâ€”fun but hardly essential. If you collected the token slow songs from a bunch of pop punk albums, youâ€™d have Worth Takingâ€™s Hangman.Â

Violent Femmes: We Can Do Anything