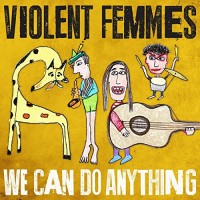 Add it up productions

For most of my youth, I lived in small-town Wisconsin. Donâ€™t get me wrong. Iâ€™m not complaining. In general, it was a wonderful way to grow up. It was the kind of childhood that Norman Rockwell painted pictures of. That being said, there wasnâ€™t much in the way of subversive art or culture. The radio was mostly classic rock or hair metal. My exposure to new music consisted mostly of reading Rolling Stone in the school library. Occasionally, I would make it to The Exclusive Company and buy a new tape or two, based entirely on the magazineâ€™s description. (Exclusive is a small Milwaukee based chain of record stores that exists to this day. I still go there every few years when Iâ€™m in the area.) I rarely actually heard music before I bought it. (You kids have it so easy today. Blah, blah blah.) Back then, it was definitely a crap shoot.

We also did a lot of tape trading. When one of our small group of friends hit on something good, we were eager to share it. Iâ€™ll always be grateful to my friend Trent for loaning me his copy of 1983â€™s Violent Femmes (and The Dead Milkmenâ€™s Big Lizard in my Backyard). I had no idea what it was or how to describe it, but it spoke to me. Before folk-punk was a thing, there was Violent Femmes. Their 1983 self-titled album is about as close as you can get to recorded perfection. Gordon Ganoâ€™s whiney voice and the sparse instrumentation made for the ultimate musical expression of adolescent sexual frustration. (To this day, if you put that record on, you can expect to hear me to howl along at the top of my lungs.) Best of all, they were from Wisconsin. The trio was about the coolest thing that we could claim as our own.

Violent Femmes have released several more albums and many more great songs over the last 30 years. Unfortunately, nothing they did later seemed to strike a chord with the public (or me) the way that first album did. That being said, I was excited at the prospect of hearing some new material from the band. I saw them live a couple of years ago, and they clearly still have their chops. I was a little surprised to learn that We Can Do Anything is their first new record since 2000â€™s (underrated) Freak Magnet. It may not be fair, but itâ€™s virtually impossible for many of us to listen to any new VF release without comparing it to Violent Femmes.

The band hints at understanding that on the opener â€œMemoryâ€. The song laments a lost lover, while also acknowledging blame for the loss and looking back at how far this music thing has taken them. Second track, â€œI Can Be Anythingâ€, is my least favorite song on the album. The de facto title track sounds a bit too much like a childrenâ€™s song. Or worse yet, like the theme song to an annoying kidâ€™s TV show. That being said, itâ€™s extremely catchy and will almost certainly get stuck in your head. â€œIssuesâ€ is another tale of a relationship gone bad. Itâ€™s like the good old days (think â€œPlease Do Not Goâ€), but with a more mature perspective. â€œHoly Ghostâ€ uses the type of confounding spiritual imagery that Violent Femmes occasionally employ. â€œWhat You Really Meanâ€ is a beautiful tune in the 70â€™s singer-songwriter tradition of Jim Croce or Cat Stevens (think â€œGood Feelingâ€). Fortunately, Ganoâ€™s unconventional voice keeps it from getting too sappy.

â€œFoothillsâ€ is another staccato, off kilter love song of sorts. â€œTraveling Solves Everythingâ€ has a marching beat that might remind you of â€œGone Daddy Goneâ€, but replaces the xylophone with accordion and banjo. Iâ€™m not sure that taking an unplanned trip will cure all of lifeâ€™s ills, but they make a pretty convincing argument. The Horns of Dilemma show up on a handful of these songs, filling out the minimalist sound of acoustic guitar, acoustic bass and snare drum. â€œBig Carâ€ follows the familiar theme of teenage lust, but ends with a surprisingly dark twist. The sound on â€œUntrue Loveâ€ reaches all the way back to the earliest days of rock and roll. Closer, â€œIâ€™m Not Doneâ€, is a man looking back at his successes and failures. It also teases the listener with a promise of more to come.

Ultimately, I appreciate the fact that Violent Femmes didnâ€™t try to make too grand a statement on their first album in more than 15 years. Itâ€™s enough that Gano and Brian Ritchie have put their differences behind them and are making music again. We Can Do Anything is ten songs in just over 30 minutes. It picks up right where the band left off, like no time has passed at all. It features their signature blend of folk and punk and country and gospel, with wry lyrics and plenty of sarcasm. Of course, it doesnâ€™t measure up to their first album, but then very few do. (If youâ€™ve never heard Violent Femmes, you must go get it immediately. Iâ€™m actually jealous that you get to hear it for the first time.) All in all, We Can Do Anything is a really enjoyable listen, and a record that Violent Femmesâ€™ fans will be proud to add to their collection.Â