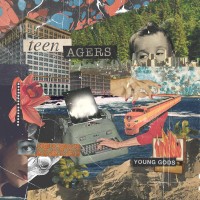 With a clashing of angsty vocals and modestly rough punk instrumentals, the Orlando pop punk act, Teen Agers, shows up big with their stellar new album, Young Gods. Following their debut 2013 album I Hate It, I think they really crawled into their niche in the punk scene. It is easy for bands, like Teen Agers, to get caught in the rapids of the larger music scene, losing the ability to stand out and gain a decent following. But, with a rugged sound that reminds me of a hybrid between The Menzingers and Jawbreaker, I believe this band really hit the sweet spot on this release.

If there is anything I love more than seeing small punk acts, like these guys, blossom, itâ€™s getting to see them produce some really high quality music. This album has everything musical aspect I love. It has high energy, a perfect meld of good lyricism and expert instrumentals, and it just sounds clean and appealing to the ear. A track like â€œNo Shadowsâ€ really demonstrates what I like to see in modern punk music, with well-developed lyrics that emanate a fun atmosphere, carrying just enough aggression and power to be considered a real head-banger.

An addition to why I like this album so much is because the lyrics deviate from the most common clichÃ©s of pop punk song writing, focusing on personal conflict and emotional indifference that really add value to the album, avoiding speaking purely on personal experiences with heartbreak or failure. This band really stands out to me. I personally believe that the â€œcookie-cutterâ€ pop punk scene needs more acts like Teen Agers, and deserves albums like Young Gods. I expect a lot from this group and have been listening to their album on repeat for days. I sincerely suggest you give it a play.