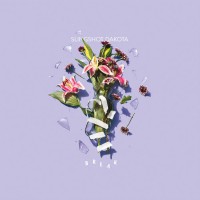 Slingshot Dakota's Dark Hearts was one of the records that got me through a rough 2012. "Light" was one of those tracks that had that instant pull to it and I knew it'd tether me to Carly Comando's stories for years to come. Four years ago, my then-fiancee and I got lost for weeks on end in that album. How ironic that now, years after things failed, I find myself absorbing Break. Poetic, given "Light" warned about hearts aging and growing apart with time. This new album, while at first glance seems laced with negative themes about relationships, offers great insight through Comando's commentary and how she made love and marriage work with drummer, Tom Patterson. It's another indie-pop/rock gem from the duo bent on encouraging you to take each chance you get on love.

The two-piece pine over several DIY/emo tropes on the record in terms of storytelling and lyricism but what stands out most is how punchier their sound's gotten. "Monocacy" and "Lewlyweds" are fine examples of this which play directly in line with what Comando touted about the record a few months ago. She said she wanted Patterson's drums to stay in the background more, allowing her vocal melodies to come to the fore -- so said, so done. As seen on the slow, shimmery "Stay". The opening half of Break sets the tone in terms of Comando's experimenting with pedals and which ones suit her keyboard as quite a few tracks feel much more ragged and piercing as opposed to the catchier anthems of old.Â

"Doreen" is another standout (especially if you're a fan of Pity Sex) and boasts the characteristics of their old sound. Chunky bass, heavy distortion and fuzzy, brisk rhythms. Note, Comando still manages to let her voice shine through on these tracks which in the past, she may have held back on. I think it's a smart step in their evolution, roughing up and dirtying their sound but still letting their musical tempos hinge on her vocals. "Paycheck" follows in a similar vein (for fans of Silversun Pickups) smartly setting the stage for a bunch of overly-dramatic tracks to bring the curtains down. The acoustic "Too Much" and the slow-burn of "Storytellers" bookend things as big statements of how the band's grown over the last couple years. Faithful to the sound that got them here but still switching up their style to push on. Break is very engrossing and full of life. Just let the self-titled closer envelope you and you'll see what I'm talking about. It's a beautiful kind of pain. Much like life. It also hits home personally for me as it directly responds to "Light" which warned of the fading and darkness in heartbreak. This closer though is a shake-up, reminding you to dust yourself off and get on the horse again. Much appreciated.Â