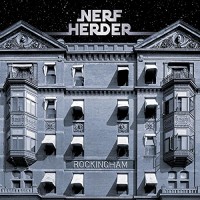 Letâ€™s get right down to business: â€œWe Opened For Weezerâ€ is my favorite Nerf Herder song since â€œWelcome to My Worldâ€ off 2002â€™s American Cheese. In my interview with Parry Gripp (itâ€™ll post soon!) he talks about how Weezer was nearly the sole reason they started the band in 1994, but due to their musical abilities at the time they sounded more like The Ramones. But the nerd was always strong with these ones, and the Weezer inspiration has always shone through, with their amping up of the silliness, patheticness, and grossness in their lyrics. In this nostalgic tale of â€œWe Opened for Weezerâ€, they make it a complete Weez homage with a midtempo beat, soft arpeggiated verses, huge fuzz-pedal choruses, and a big solo because these NH dudes can play their guitars well now. Itâ€™s all very â€œSweater Songâ€ in the best ways. It directly references â€œSay It Ainâ€™t Soâ€ in the chorus to great effect, and itâ€™s just as singable and addictive as that classic song. Listening close to the lyrics you can put yourself right in their shoes and imagine being back in 1997, and feel just how amazing it must have been to follow the Weezer bus in your rental van, sing along from the crowd every night, and hanging out backstage with the band, friend and megafan Karl Koch, as well as Mykel and Carli, on the same tour that the fan-club president sisters died tragically in a car crash during.

Nerf Herder rules. I am a nerd, was a loner when outside of my circle of close friends in high school, and essentially, a punk rock loser. Still am I guess, though I did snag an awesome wife somehow. Me and my school band and orchestra geek friends would go out skateboarding to NHâ€™s self-titled debut in the mid 90s, and I had the My Records (Joey Capeâ€™s short-lived label) version from â€˜96. The album was rereleased on Arista in â€˜97 and ended up being their only major label album. 2000â€™s How to Meet Girls hooked me hard too, while being a more traditional â€œRamonescoreâ€ Honest Donâ€™s/Fat Wreck style album than their scrappy debut, it ruled. 2002â€™s American Cheese took longer to hook me (I was in college and all like, â€œheeeeyy man I only listen to Fugazi and Modest Mouse and Bright Eyes nowâ€) but is totally awesome looking back. IV, released in 2008, is their weakest record, but a fun listen for sure. Rockingham, their first record in 8 years, is their best and most consistently funny record since How to Meet Girls. Itâ€™s so, so good. It tones down the perverted sexual jokes of Cheese and My EP while ups the pop culture references to stratospheric heights. The record hits you with dorky and hysterical jokes rapid-fire from when you hit play all the way to the end of the record.

Now to hop back to the top of the record, â€œPortlandâ€ is an attack on hipsters, and Iâ€™m sure it was chosen as the setting because of Portlandia the surprise hit show. Hipsters are an easy target, but that doesnâ€™t keep the song from being hilarious. Favorite line: No one gives a doggy-doo / About your stupid home brew / At all.â€ The bridge has call-and-response vocals with Gripp listing â€œeverything that he knows about Portlandâ€ and the band responding with â€œPortland...â€ In one of the most intentionally unenthused half-yells Iâ€™ve heard since Lonely Islandâ€™s â€œSports.â€

â€œAt the Conâ€ was inspired by the band having a blast playing DragonCon a couple years back. Itâ€™s the nerdiest song on the album, which says a lot, and I mean that lovingly. â€Stan Lee and a Spiderman / Are gonna play some Settler of Catan. / Weâ€™re gonna tabletop it!â€ gets me every time. â€œAllie Goertzâ€ showcases Grippâ€™s unique rhyming abilities: â€All my Google Alerts are for Allie Goertz / â€˜Cause I like to know what sheâ€™s doing. / All the Ernies and Berts tuck in their in shirts / When Allie Goertz walks by / And sheâ€™s friends with Chris Hardwick, / And heâ€™s not friends with jerks! / Oh, sheâ€™s like Luci Ricardo, / And Iâ€™m Fred Mertz!â€ And he works in â€œMiley Cyrus twerksâ€ to rhyme with â€œGoertzâ€ later. It has a cheap jokey bridge with a Stephen Hawking impersonator (probably still Gripp), with him telling Gripp heâ€™s too old for this girl, who then flips out, accuses him of ageism and tells him, â€Take your little Speak-And-Spell, and your Presidential Medal of Freedom... â€ and wheels him out the door. I had never heard of Allie Goertz, any fan of Nerf Herder will love her. Her most recent EP is a concept album about Rick and Morty. Thatâ€™s right.

On first listen, I thought that they should have ended the album with â€œStock Photo Girl.â€ Thatâ€™s the standard move, to end an album with a longer slower tune. The spoken word parts of the song, talking to the â€œcustomer service rep,â€ are amazing (â€The penis shrinking pill worked greatâ€). But instead of that being the closer, they wrap up with â€œClose Your Eyes and Dream,â€ and with further listens Iâ€™m glad they did because it ended up being one of the songs that makes me laugh out loud the most. The songâ€™s subject, actor Tom DiNardo, an actor (Jessica Jones season one, episode four. What a score!) and childhood friend of Gripp, now follows me on Twitterâ€¦ as well as Gripp. Nerdgame Leveled Up! Best rhyme: â€sneaking back into your backyard, oh / Your brother got mad and kicked me in the DiNardosâ€ Then Gripp gets yâ€™all hip to a cool new cocktail: â€œWeâ€™re drunk on Bacardi and Gatorade, oh / Thatâ€™s called a Bagatorardi!â€

While â€œAt the Con,â€ â€œDr. Whoâ€ and â€œThe Droid You're Looking Forâ€ play to a certain type of geek that's not quite me, they are still solid tunes and very singable. The attention to detail, for a pop punk â€œnerdcoreâ€ band, is pretty remarkable. â€œThe Girl Who Listened to Rushâ€ is full of octotoms just like Neil Peart would have played if he was in the band, and the celeste that ends the album is a beautiful touch (though it might be a children's toy celeste or some kind of weird glockenspiel toy. Regardless, â€œbeautifulâ€ isn't a word I use in punk reviews too often.

You never thought a Nerf Herder review could be this long, didja? I have a long history of loving this band, and they were a big inspiration to my geek rock beginnings just as Weezer was to theirs. Though Gripp now makes a living as a songwriter for childrensâ€™ television, I hope we don't have to wait eight more agonizing years for the next Nerf Herder album.