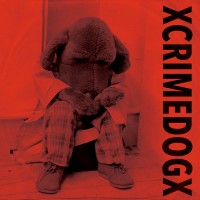 So, look, this sounds kinda cray-cray, but it's all true. Back in 1986, McGruff the Crime Dog, the kindler, gentler, more canine face of Nancy's War on Drugs released an EP Smart Kids (Don't Do Drugs). Basically, the music is the sort of sturdy, unimaginative work you expect from commercial jingle studio hacks, spiked with some oddball production touches that seem a bit, well, baked. The lyrics are subtle like a sledgehammer to the face, overstated to the point of auto-self-parody.

At some point this mess caught the ears of visual artist/sometime The Saddest Landscape guitar slinger Daniel Danger, and it prompted him to wonder what it would have sounded like if those same songs had instead been recorded by some unsmiling straightedge punks who'd worn the grooves on their Minor Threat records down to nothing.

That question must really have taken hold of him, because he made it into reality, and X Crimedog X's 1984-1986 is the result.

I may get stomped for this, but even though McGruff announces, "we're X Crimedog X from Boston Massachusetts," more than once on this short set, the vibe I get from this is West Coast -- a hair slower and less trebly than the class of This is Boston, Not L.A. and the DisChord crew, with some call & response gang vocals right out of the Damaged-era Black Flag playbook. (That said, if you told me "Crack & Cocaine" was a deliberate and specific homage to Government Issue's You, I wouldn't raise an eyebrow.)

This all works because Danger and his pseudonymous accomplices play the music with conviction and (mostly) straight. There's little here to suggest the underlying message is being mocked, and a lot to suggest the affection for sXe hXc is genuine. Even the spoken word bits seem more imitative of MacKaye's infamous mid-song spiels than satirical of them. The result is a surprisingly solid retro hardcore EP that's also pretty funny.

By the way, I'm not saying this is a full-fledged The Saddest Landscape side project, but the credits include "Andy" and "Other Andy" and Jay Maas (Defeater) was photographed behind the board . . . you can draw your own conclusions.