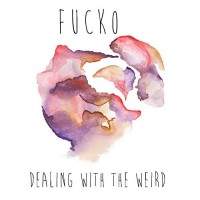 Fucko sounds like Brianna Collins (Tigers Jaw) laying down vocals for Basement. That's how amazing Sarah Desmarais marries her vocals to the grungy sound this Boston three-piece break out. With musical structures that further nods to bands like Sainthood Reps and Adventures, you're in for quite a kick if you're looking for buzzy guitars and heavy slabs of distortion -- all with melodies that'll make '90s flannel-wearers feel tingly again.

Dealing With the Weird combines a lot of rock influences though. It doesn't just stick to one narrative. In terms of the guitar-driven grunge effect, "Best Little Something In Somewhere", "Kind Of Mean It" and "Dizzy" are all meant to have you rushing back for your Nirvana tees. The guitars are raw, soulful and filled with discord. Desmarais' vocal delivery is often low, relaxed but still very visceral. She's in the background but not too far back when it comes to her on the mic, which surprises you when you ingest how deliberate she comes off amid a swath of thick, crunchy basslines ("20 Foot")and heavy percussion ("Submarine"). Her words cut deep, like Frances Quinlan of Hop Along but a bit more pissed off and decisive.Â

When they go lighter, they continue to impress also. The mid-tempo alt. rock jam in "Wishful Thinking" as well as the more anthemic "August" are great examples of this, showing their diversity but also, how they can adapt to a pop-punk scale. Full of energy, dynamic and very fluid. Each song, each piece of reverb, each note off the amp...all flow brilliantly into the next. Fucko never let up and even with "Wake Up", a song that starts off hauntingly slow and builds to a sludgy ball of catharsis, they never lose the plot and that's to make compelling and emotional music.Â Dealing With the Weird is a versatile album that doesn't redefine the grunge genre, it doesn't reinvent any wheel but as familiar as it sounds, it's still aggressively refreshing. One or two tracks too long but highly recommended.Â