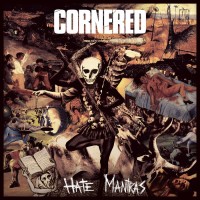 The Netherlandâ€™s have been known for producing quality hardcore in Europe, boasting both No Turning Back and Born From Pain, on the countryâ€™s resume of touring bands. Cornered, while not as widely known as the aforementioned bands, continue the legacy of solid, heavy hitting Dutch hardcore with Hate Mantras.

Hate Mantras is heavy, groove-laden metallic hardcore E.P. that feels like New York, despite being Dutch. Cornered have always released heavy, pit inducing records, but Hate Mantras features their most cohesive and well written material to date. The song â€œLove is Painâ€ achieves considerably more depth than much of the material from previous releases. The addition of a solid crooning vocal delivery enhances the emotion and exhibits a talent that proves vocalist Niels has more to offer than being just another hardcore front man.

My single complaint about Hate Mantras is that there isnâ€™t more of it, with 6 songs (7 with digital release), one of which is 6 seconds long; it is over almost as quickly as it starts. That being said, Iâ€™d always rather be left wanting more, than waiting for something to be over. The production is spot on, and I am very much looking forward to more of this Cornered on future releases.

Since my first experience with Cornered, which was simply an E.P. titled â€œF*ck Off!â€ on 6131 Records, they have grown into a bigger, stronger beast. Hate Mantras has Cornered sounding like The Netherlandâ€™s answer to Leeway, and if that isnâ€™t a compliment to a heavy hardcore band, I donâ€™t know what is. FFO â€“ Leeway, Sick Of It All, Born From Pain, and hard pit riffs.Â

Fucko: Dealing With The Weird

Muncie Girls: From Caplan To Belsize