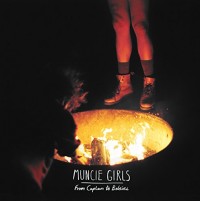 Muncie Girlsâ€™ debut is full of heavy hitting poppy and indie songs all at once. Their debut album, From Caplan to Belsize shows just what the band is capable of with indie punk songs full of smart lyrics and catchy quips. The album has a perfect balance of what a solid band should sound like with a solid balance of songs to create a great debut. After a few smaller releases and fresh off a tour with Such Gold, the trio delivers ten new songs that hit the eardrums just right.

From Caplan to Belsize take no time warming up, immediately kicking in to indie punk mode. The trio has a great musical dynamic which carries the groupâ€™s songwriting abilities above a territory that creates more than just substance. Each song is an anecdote into the dry lyrics of vocalist, Lande Hekt. Hektâ€™s songwriting shines through on coming of age songs like, â€œLearn In Schoolâ€ and "Gas Mark 4â€ showing just what the band is capable of between storytelling and vivacious melodies.

The rest of the band does a great job of accompanying Hektâ€™s soothing vocals. The drums are hard hitting when they need to be and quiet when they should be. Thereâ€™s no question that Muncie Girls know how to create melody. â€œBalloonâ€ has both the catchy and lighter side of the group, showcasing the bandâ€™s ability to make uniform but diverse songs.

Overall, Muncie Girls have created a fresh touch to the mixture of indie and punk. The band has officially mastered their sound and made ten songs the band should truly be proud of. The album is full of variety while remaining consistent with the sound the band has made. From Caplan To Belsize is looking like a top ten contender for 2016. Youâ€™ve been warned.

Up For Nothing: Swindled