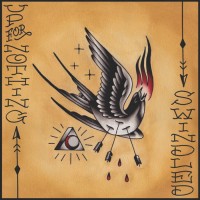 April is almost summer time, and for the sake of this review letâ€™s say that it is, because â€œfun spring time punk rockâ€ just doesnâ€™t have the same ring to it as â€œfun summertime punk rockâ€, everyone can get behind that vibe, so lets stick with that for now. Up For Nothing have delivered a record that reminds me of sunny bike rides and afternoon beers in the park with some pals.

The up beat and catchy vibes of Swindled have a nice balance of 90â€™s skate punk and â€œThe Gold Recordâ€ era Bouncing Souls. Up For Nothing could easily get lost in a sea of Red Scare bands with gruff vocals and catchy choruses, but they have created a nostalgia factor that helps to push Swindled to a new level. It took me a few listens to fully appreciate the subtle hooks and nuances of Swindled, but it was worth the time spent. The track â€œsinkâ€ makes me want to grab some kids huffy and ride it off of a dock, Gob style into a lake, and that is a feeling I donâ€™t get from many records these days, so for that â€“ well done.

This record is not without its faults, there are a few very short songs that serve little to zero purpose and could cut the number of songs from 14 to a happy twelve, but despite that, the record still feels nice and organic with a solid flow from song to song. The production is great, and was handled by Pete Steinkopf from The Bouncing Souls; it is punchy and raw, which suits the music very well. It doesnâ€™t help the comparison unfortunately, as the influence of The Bouncing Souls does bleed through significantly. But hey? Who doesnâ€™t love The Bouncing Souls? Fun haters, thatâ€™s who.

Up For Nothing are far from reinventing the wheel with Swindled, but it is a nicely crafted, feel good album that will suit any road trip you make take this summer. Up For Nothing will undoubtedly get lost in the sea of bands that perform at FEST every year, but if you happen to pick up on them, a pleasant surprise is in store. FFO: Red Scare Industries, The Bouncing Souls, Hot Water Music, and Pabst Blue Ribbon.

Muncie Girls: From Caplan To Belsize