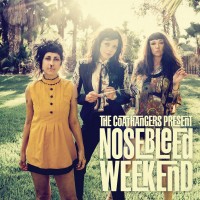 The Coathangers do not give a fuck now, nor have they ever. But what started as a joke seamlessly developed into a credible band. With Nosebleed Weekend, the trio delivers tighter, stronger and more confident songs than ever before.

On their first experience recording outside Atlanta (and in Los Angeles), The Coathangers still play primarily garage punk but lace it with other influences, most noticeably surf rock riffs (and in one instance a destroyed squeaky toy). Singer/guitarist Julia Kugel has always played simple melodies, choosing memorable repetitive single notes or chords. Thatâ€™s not to say she doesnâ€™t let loose when the opportunity presents itself, such as on â€œExcuse Me?â€ Sheâ€™s allowed this freedom because of her band mates. Meredith Francoâ€™s bass lines remain muscular as ever (â€œWatch Your Backâ€) as does Stephanie Lukeâ€™s drumming. Both are constantly adjusting to whatever a song calls for, even the softer â€œCopycat.â€ Contrast is a word that so perfectly defines The Coathangers. Luke and Kugelâ€™s vocals are so different from one another but are effective in their own rights. Lukeâ€™s deep, powerful voice is the more outright threatening while Kugelâ€™s happily plays innocent. That is, before absolutely devouring your ears. Sheâ€™s like multiple voices in your head but with all of them acting as the devil. â€œDown Down,â€ the albumâ€™s best track, and the aforementioned â€œExcuse Me?â€ demonstrate the control these women have in even the most cacophonous states.

While rooted in strength, Nosebleed Weekend is not without its vulnerability. Early songs tout a bratty attitude such as, â€œI still love you, darling, but youâ€™re so dumb, looking like a little baby, should be sucking your thumb.â€ But the devil-may-care brashness turns somber as the record progresses. When Luke sings, â€œI ainâ€™t mad, Iâ€™m feeling down [...] thatâ€™s the way that it goesâ€ you can feel both her pain and apathy hitting all at once. The lyrics arenâ€™t positive, usually quite the opposite. But theyâ€™re delivered with such bravado, itâ€™s easy to overlook the deeper meaning.

The Coathangers have remained underground for too long, even after their last two excellent releases. Hopefully their fifth album changes that. They are so unique and unforgiving but without losing what makes them enjoyable. Nosebleed Weekend couldnâ€™t have been made by any other band. Frankly, it couldnâ€™t have been made by The Coathangers five years ago. This is the result of three women who have perfected their sound, now itâ€™s our job to listen.Â

Up For Nothing: Swindled