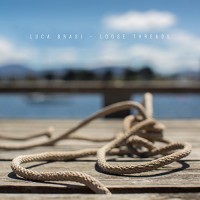 Having long been one of Australiaâ€™s best kept secrets, and often playing second fiddle to the hype machine that is The Smith Street Band, Luca Brasi make the kind of emotionally charged, resonant and melodic punk rock that speaks confidently and earnestly to fans of Restorations, The Menzingers and the aforementioned Wil Wagner vehicle. Functioning as a â€˜while youâ€™re waitingâ€™ release in between LPs, the Loose Threads 7-inch acts as a perfect accompaniment to By A Thread, the groupâ€™s stellar second album, released on Poison City Records in 2014. While only four tracks in length, Loose Threads is clearly succinct by design, and pairs some tasty offcuts from the By A Thread recording sessions with a heartfelt acoustic number.

Kicking off with the scorching 41 Degrees (or 105 Fahrenheit for those playing across the pond), the Tassie boys waste no time, and throw a banger anthem right up front. With a tight rhythmic back bone from drummer Danny Flood, driving guitar riffs and even a flashy solo towards the end, this track is easily one of the groupâ€™s most engaging songs to date, and leaves somewhat of a question as to why it didnâ€™t make the final cut for their previous record. Reservations aside, vocalist/bassist Tyler Richardsonâ€™s noticeable Aussie twang renders lyrics like, â€œHow do you come so far/Only to be so far behind,â€ all the more charismatic and appealing.

On In The Sight, Luca Brasi dial the tempo down, and showcase the flair of experimentation they flirted with across By A Thread. Beginning with a softly swelling verse, that builds and builds over dynamic instrumentation from guitarists Thomas Busby and Patrick Marshall, before finally cresting into a rousing chorus. Richardson sings of bitter-sweet home town memories, alcohol inflicted melancholy and 'having more than a few'Â with the kind of every-man, working-class lyricism that gives the song an emotional weight thatâ€™s undeniable. Quicksand lands as a mid-tempo rocker with catchy riffs and dark, foreboding imagery that pairs blood in the mouth with a drowning both metaphorical and literal.

The finale for Loose Threads comes in form of one of By A Threadâ€™s standout tracks, Borders and Statelines, this time performed as a stirring acoustic number. The band pulls out all the stops on this one, which is oddly fitting given that the song had its inception as an acoustic track initially, and this version sets about to bring that creation full circle. The track sports one of their strongest choruses, with delicate guitar picking, great harmonies and a guest vocal spot from Craig Selak of fellow Aussie brat punks The Bennies.

On Loose Threads, Luca Brasi distil their essence as a formidable Aussie punk rock act, and provide a collection of tracks that could comfortably find homes in sweaty basement shows, or quiet backyard drinking sessions. With a new album on the way this year, and this release being available for a criminal five bucks on their Bandcamp page, now is the time to jump on this Tassie bandwagon.

Hallelujah The Hills: A Band Is Something to Figure Out