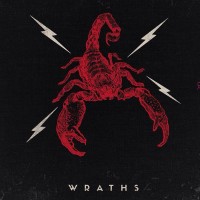 Wrathsâ€™ self-titled debut is a complete retro throwback to the early days of hardcore punk. If youâ€™ve read some of my other work on this site, youâ€™ll know that Iâ€™m very much an anti-traditionalist. Iâ€™m always looking for what a band can do thatâ€™s never been done in the genre before. Thatâ€™s true, and I certainly take some points off for the fact that Wraths doesnâ€™t do anything different to show us that punk really needs this bandâ€™s particular music. Nor do they even do anything to show us why frontman Jim Lindberg, lead singer of Pennywise, needed a side project for these 12 particular tracks, instead of just making this into the new Pennywise album. But the reason I still really enjoyed Wraths is because hardcoreâ€”a genre so ill defined that its definition seems to change faster than the seasonsâ€”has become such a dreary affair these days. If I have to listen to one more album of incoherent screaming from a band trying to sound abrasive, but which is actually being carefully produced with an eye towards commercial success, Iâ€™m going to just give up and start listening to country music. (Not really.) It seems like, ever since the release of the Refusedâ€™s The Shape of Punk to Come in 1998, weâ€™ve seen band after band try to replicate it with less and less talent. While, occasionally, someone does use this style to create something really interesting and innovative (PEARS), much of what passes for hardcore these days even has me hoping to return to the good old days.

The biggest difference between Wraths and the hardcore of old is really just the production quality. Besides the fact that recording technology has come a long way between the 1980â€™s and 2016, Jim Lindberg is also not a teenager trying to piece together just enough money to record during the graveyard shift at a local studio using shoddy equipment. The band likes to brag about how minimally produced this album is, which is certainly true, but the recording itself is clean and crisp. The vocals arenâ€™t mixed so far under the track that you canâ€™t hear them. Lindberg doesnâ€™t try to sing so quickly that you canâ€™t understand him. With a few very small exceptions, Lindberg never screams on this album, his voice almost never rising above a hearty shout. The result is something I had almost forgotten was possible: an album of completely coherent lyrics. I mean, maybe I had to strain my ears a little bit to hear some of the lyrics, but then again Iâ€™ve been going to loud rock concerts for 17 years without earplugs, so that might have something to do with it. Like everything else on this album, the lyrics are exactly what youâ€™d expect out of a classic hardcore album, sticking to very conventional punk themes of alienation and personal freedom.

Itâ€™s hard to pick a favorite track off of this album, because itâ€™s not that kind of album. There arenâ€™t any individual songs that I go back and listen to. When I want to listen to this album, I put it on the first track and play it through until the end. Thereâ€™s a light sprinkling of grunge here and there, and a few of the tracks at the very end of the album start to slow down a little, but for the most part it feels like one long, powerful, and really fun, blisteringly fast hardcore song. Wraths does a lot of things youâ€™ve heard before, but it has a hell of a fun time doing it!

Hallelujah The Hills: A Band Is Something to Figure Out

HP Lovecraft: Hollowe'en in a Suburb and Others