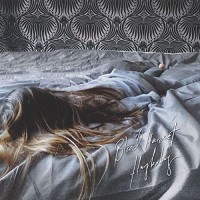 Haybaby have a way of making Brooklyn come to life. They dropped their debut LP last year in Sleepy Kids and it proved to be a sharpened mash-up of punk and poppy haze. Definitely took strong lead from The Pixies as well which was an extra kick. Their new record builds on this in just five tracks but it wrestles free from the more melodic aspect of the band into a more sharpened tone. Blood Harvest, which ends up being too short for its own good,Â sees them implement and execute a lot more stylistic points around narratives of emo, shoegaze and well, let's say...a bit of Minor Threat to create a soundscape that's highly unpredictable.Â

"Stupid" finds itself playing off another thick bassline with Leslie Hong's vocals permeating with such force. It's an uncompromising punch with each lyric reminding me of Fucko as well. Tracks like these captivate the depth of that Pixies influence I spoke of with "Kramer/Dreams" then taking you for that whispering shoegaze drive. It's not as raw but feels subtly sly in how laid back it is -- quite a contrast to "Pig" which clocks in at five minutes but amps the record up with a huge ball of tension. The same can be said for the jagged reverb of "What It Is" -- which is just as noisy and quite unconventional for Haybaby (refer to my Minor Threat comparison). These tracks are jammed with loud, noisy, distorted guitars whose reverb climb with a primal, mysterious and unflinching presence. Much more angry than last year's album but an EP that definitely fits fans attracted to different sub-genres of heavy rock.Â

Walls Of Jericho: No One Can Save You From Yourself