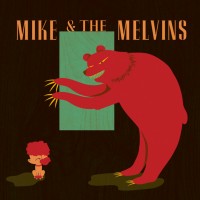 The story behind this album is quite interesting. Back in 1999, the Melvins teamed up with Mike Kunka, who was looking to kill time while his noise rock band Godheadsilo was on hiatus. They recorded an album together, but after a series of unfortunate events and some â€œjunior-high level bullshitâ€, the project was shelved and forgottenâ€¦until now! The Melvins returned to the studio in 2015 to wipe off the dust of Three Men and a Baby and put the finishing touches on the record.

From the very start, we are treated to the King Buzzoâ€™s Famous Old-Fashioned Fuzz, followed by Kunkaâ€™s echoing wails, occasionally layered with Osbourneâ€™s booming vibrato. The combination of their vocals is hypnotic. Add Dale Croverâ€™s unstoppable drumming and Kunkaâ€™s chug-a-lug bass lines, and itâ€™s like I fell into some kind of psychosis.

Godheadsiloâ€™s weird is in parallel with the Melvinsâ€™ weird, a pairing that makes perfect sense for listeners familiar with their style. The entire album is littered with nonsensical snippets throughout. In â€œA Dead Pile of Worthless Junk,â€ you can hear a wind-chime made cans and bottles in the background. â€œA Friend in Need is a Friend You Donâ€™t Needâ€ is just a two-and-a-half minute long drum solo with random shouting, complimented with applause.

The weirdness reaches its peak on the final track â€œArt School Fight Song.â€ It plays like a stripped-down black metal tune, as if it were recorded on a Fisher-Price recorder: blast beats, noisey distortion and incomprehensible whisper-screams.

The album isÂ a fitting combination for two weird artists who come together to make a wonderfully weird album.

Walls Of Jericho: No One Can Save You From Yourself