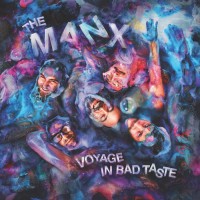 After the release of some singles and a couple of EPâ€™s, in 2015 The Manx successfully crowd funded their very first full-length Voyage In Bad Taste. For those of you who donâ€™t know about The Manx, they are five-piece folk punk (or â€œadventure-goreâ€ as they say) band from Los Angeles, California. But they are an unconventional punk band, not only in sound, but also in their instrumental make up. The band consists of bass, accordion, banjo, mandolin, drums and a whole of crusty and often metal-influenced vocals and even metal-influenced instrumentation style at times, which is what makes Voyage In Bad Taste one of the more unique albums to come out in 2016 thus far.

The band, though they are at heart extremely serious musicians, strive to make their songs like â€œRainbow Hammerâ€ (which features of King Buzzo of The Melvins) extra strange with what seem like totally out-of-the-blue lyrics like, â€œâ€¦watching you postpone this mess/Hold my hand/We can be a couple lesbians/Couple lesbians/That makes us lesbians!â€ But it is not just the fascinatingly odd lyrics in this song that make many of the songs on this album stand out, it is also the bandâ€™s ability to write such chaotic instrumentation that hits speeds of something you might hear from hardcore punk or metal-leaning bands. The song notably features lightening speed banjo and mandolin riffs that play behind the bandâ€™s vocals, which times can be big gang screams and crusty yelling from just one of the members.

â€œTighten My Gutsâ€ is one of the slowest of the sixteen tracks. It is also on the more vocally melodic songs on the album. It is also driven much by banjo and mandolin in the lead section, but the accordion is really prevalent in the rhythm section, too. As â€œTighten My Gutsâ€ continues it suddenly transitions slows down into this droning bridge filled with what can only be described as a sort of throat singing, which then move into these chorus-like gang vocals. And once that bridge ends, out of nowhere what sounds like screaming guitar fill jumps in as the pace speeds back up, but it isn't a guitar. It turns out it is actually the mandolin with added distortion and other effects.

For their first album, The Manx have done very well for themselves with Voyage In Bad Taste. It is weird, wacky, different, and a refreshing sound for the punk scene. It sets the bar pretty high for the folk punk sub-genre. FansÂ especially of bands like Blackbird Raum, Days N Daze, and even early AJJ should give this album a shot.Â