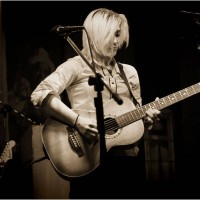 A live album is always a tricky dichotomy. Especially when that live album is recorded by a young songwriter who is still largely only known to their people in their local music scene. One of the best ways to overcome this is to pick a venue that is known for its importance to the local music scene, get the best sound guy in town to run the board, and make the album a testament to the music scene you are in. Enter Paige Bellerâ€™s album, Live and a Person.

I have always been a sucker for a strong opening tack, if you can completely grab my attention in the first ten seconds of an album you have a better chance of keeping it for the duration than having a soft opener and trying to build interest over the next several tracks. The vocal harmonies on the a capella opener provided by The New Old Fashioned find them splitting the difference between a doo-wop group and a gospel choir. The song finds Paige lamenting a crumbling relationship using the metaphor of quitting a job for leaving the company of a relationship. While utilizing an a capella track as the opener on a live album, especially when you also front a punk band locally, is taking a real risk. Luckily, the move pays off as it allows Paigeâ€™s abilities, outside of louder rock setting, as a vocalist to be put on full display.

Later on the album, John Bir and Terry Staten lend their talents on trumpet and baritone saxophone receptively to the song â€œSynopsisâ€ which finds Paige singing over a more standard form minor key pop song. While the song isnâ€™t as lyric filled as some of the other numbers, it shows Paige recognizes that there is a lot to be said for an economy of words delivered properly. Which is an amazing talent you see throughout this album, an honest feeling of emotion, be it sadness, anger, strength, or anything in between. Paige is able to take herself to a place mentally that lets her convey the exact emotion she wants you to get from each song.

The Bell Airs, one of several bands Paige plays in locally, join her for â€œMarcell the Shellâ€ which borders on alt-country in all the right ways. Thereâ€™s no attempt to utilize a fake Southern accent, just a great vocal over a song that draws from the more honest part of rock and country music. This is when you start to realize that in addition to being a great songwriter, the knowledge of music required to touch on all of these different genres is enormous, intimidating even. There are many songwriters who can, and do, move around stylistically from one album to the next. But, to capture this many different genres on one album is impressive. If you live locally, like I do, and know that Paige is simultaneously playing in four to five different bands in which she can be found playing anything from guitar, bass, and even drums is even more of a testament to her overall musical abilities than anything else.

â€œI Know that youâ€™re Homeâ€ is an amazing song about the end of a relationship, itâ€™s also very dark. Instead of being your typical breakup song, itâ€™s a song about obsession that details the actions taking place so well. The song, perhaps unintentionally, falls into the folk tradition of the murder ballad. With a refrain of â€œI know that youâ€™re home cuz, I can hear you breathing,â€ that by the end of the song transforms into â€œby the time they find you, you will not be breathing,â€ the song is a very gripping and thanks to Paigeâ€™s vocals and Tod Weidnerâ€™s guitar work haunting piece of music.

The next song is called â€œTerms of Agreementâ€ and it is one of those songs that some songwriters spend their entire lives trying to write. You know what Iâ€™m talking about, one of those songs that when you hear it for the first time you just think â€œOh fuck, this is something special.â€ The majesty of this song is in the simple honesty of the lyrics, when you hear â€œwe write out our contract, our terms of agreement. You keep the apartment, Iâ€™ll keep the resentment. And you keep the friends we had, Iâ€™ll keep the bars.â€ You know that feeling, you donâ€™t have to decipher the metaphor, you just know. And the way itâ€™s sung makes it hit you like a brick in the gut. It takes you back to your last breakup and keeps you there for the rest of the song. While this is an incredibly strong album, this is just one of those songs that will bowl you over each time you hear it. This, no matter what level of notoriety a musician has obtained, is a true rarity and always a welcome surprise wherever you find it.

The album does, occasionally, suffer from sequencing when you have a couple of slower songs back to back. However, that does not discount the fact the songs are well crafted and work perfectly fine as standalone pieces. One also has to account for the fact this album was recorded live, and there is a level of engagement that can be achieved with an audience in person that can never be replicated on a recording. It is highly possible the failing isnâ€™t with the sequencing itself, but the fact I am experiencing only one half of what was initially both a visual and musical experience when I listen to the album.

Overall though, this album is a success. Not only does it document the strength of a fantastic young songwriter, but it captures the strength of an entire scene coming together to back this song writer. While John Bir, The New Old Fashioned, Tod Weidner, The Bel Airs, and several other guest musicians all come from different backgrounds and eras of the Dayton music scene they all come together here to create a cohesive album that tips its hat to multiple genres with a level of mastery you donâ€™t get in many places. Combine that with Paigeâ€™s vocal and songwriting abilities and you have a solid album for riding home from a loud show or for those late night drives when you donâ€™t have anywhere to be other than not at home. Itâ€™s also a great starting place for anyone not familiar with Paigeâ€™s solo material prior to this.

Sorority Noise: It Kindly Stopped For Me

Loner Chic: Year of the Goth