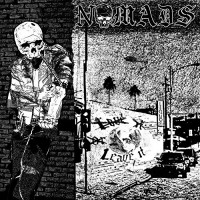 Nomads have a pretty impressive punk rock and hardcore resume â€“ maybe they donâ€™t quite qualify as a super group per se, but they are damn close. Boasting ex members of bands such as Product of Waste, and Southern Californiaâ€™s Minority Unit, as well as having current drummer of ACxDC behind the kit, these guys are no strangers to writing fast and heavy music. While Nomads donâ€™t sound like any of the members past bands, they are definitely working on carving out their own niche in the Southern California punk rock and hardcore scene; having toured along side the likes of Extreme Noise Terror, and Rotting Out, as well as sharing the stage with hardcore legends American Nightmare, things seem to be going well for this d-beat powerhouse.

Love It or Leave It is Nomads first proper full length, and while their past releases have painted a picture of the d-beat punk that Nomads produce, this LP showcases some cool new aspects of their sound. Love It or Leave It shows some growth as a band, while the record is packed with fast and crisp d-beat style hardcore, it also features ripping solos, and a few brief welcomed breaks from the break neck d-beat tempo. These slower songs (I use the term slow loosely, slower than fast as hell is what I mean) are my favorite moments of Love It or Leave It. The song â€œSlaughterhouseâ€ is a stand out track that has a mid tempo Motorhead vibe with some great lead guitar work, it is heavy and catchy, itâ€™s everything I am looking to hear in a well rounded punk song. It is a nice natural break to the aggressive speed of the majority of the record.

Nomads bring more to the table than experience and well-executed crust punk songs; there is a real "fuck you" vibe to Love It or Leave It. It is a very Californian take on d-beat; if you had asked me prior to hearing this album if I could draw comparisons between d-beat and N.W.A. Iâ€™d have been sceptical, but it is there, and they make it work. You donâ€™t need to get very far into Love It or Leave It to hear how vocalist Mocaine feels about authority, police, and the outside world. Describing themselves as â€œOutlaw Punksâ€ and having a song titled â€œGang Mentalityâ€ the vibe is clear; this record is as pissed off as they come. You can feel the anger when listening to Love It or Leave It. Iâ€™d like to see more punk rock bands waving a middle finger flag as high as Nomads do, this aspect nicely sets Nomads aside from some of the more fashion show punk out there, you can tell that they mean every word.

Love It or Leave It is solid, but not without itâ€™s flaws, two covers are included on this record GG Allinâ€™s â€œCommit Suicideâ€, and The Sisters Of Mercyâ€™s â€œLucretia, my reflectionâ€. The GG Allin cover doesnâ€™t do it for me; that isnâ€™t to say that the cover is executed poorly, I just donâ€™t enjoy it as much as the bands own material. â€œCommit Suicideâ€ is a low point and the weakest part of the record, it doesnâ€™t add anything and is a song I am tempted to skip as the record plays, but they bounce back nicely with â€œC Wordâ€. I find the Sisters of Mercy cover to be more enjoyable (I am a fan of the original song â€“ so that helps), â€œLucretia, my reflectionâ€ is a good closer for Love It or Leave It, it gives the listener a feeling that the record is coming to a final epic conclusion. I would be more stoked if they had included an original song with this feel, but this cover is by no means detrimental to the record over all. Covers on a record are always a bit of a gamble, so putting two covers on a record as brief as this one seems like an odd choice, but it is what it is.

Love It Or Leave It is a fast and pissed off hardcore influenced d-beat record, and while Nomads wear their European influences on their sleeves, this record comes off as all American. This is a fun, angry, crusty hardcore record that despite the expected hiccups most bands face writing their first LP, still rips pretty hard. FFO: Motorhead, Tragedy, Anti Cimex, and Skitsystem.Â