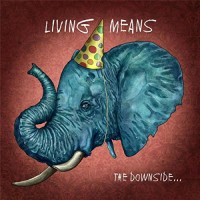 With, The Downside, the debut EP from Massachusetts five-piece Living Means, I was told to expect pop-punk mixed with 90s alternative. Having grown up in the 1990s, I consider 90s alternative to be one of my favorite genres, and pretty much the last time that mainstream rock music was any good. Even for someone like me who still looks at that era through rose-tinted glasses, I understand that the 90s were a very long decade and that alternative covered a lot of ground in those ten years. Those of us who lived through that time remember a few very important things about that era: We remember that grunge can be an amazing tool in the right hands like Nirvana and Pearl Jam, and a truly horrible thing in the hands of post-grunge bands like Nickleback and Creed that popped up in the late 90s. We remember that some artists, like The Smashing Pumpkins, were important because their dark, brooding style fit perfectly with the zeitgeist of that time, and for that reason we chose to ignore the fact that Billy Corriganâ€™s lyrics sounded ridiculous. We remember that, while the early to mid-90s were a great time for artistic expression and creativity in music, it didnâ€™t take long for record companies to start to co-opt that spirit of creativity and turn it into a mass produced nightmare, resulting in some of the truly terrible atrocities of the late-90s like â€œnu metal.â€ One of Living Meansâ€™ biggest downfalls is failing to understand some of these nuances of the music theyâ€™re drawing influence from, and they allow some of the worst things about alternative rock music in the 1990s to work its way into their sound.

The album opener and title track, â€œThe Downside,â€ is a pretty strong rocker to kick off the EP with, even if the lyrics of the chorus are a lot less clever than the band seems to think they are. This is followed by â€œSharp Tongue,â€ and youâ€™re going to call me crazy on this one, but I swear it sounds to me like if No. 4 era Stone Temple Pilots covering the Dandy Warhols. But even in these songs, where theyâ€™re actually doing some interesting things musically, the songwriting amounts to the lyrical equivalent of teenage vaguebooking, always filled with a lot of young, nasally sung angst, but never really giving you an idea of what theyâ€™re talking to or even giving you a solid image to hold on to. Over the droning yet polished grunge sound of the album, the lyrics come off more like an overly melodramatic post-grunge band from the late 90s after grunge had been stripped of most of its genuine power and emotion.

â€œStay in Touchâ€ is where the album really starts to take a bad turn, as the band this song reminds me most of is Linkin Park,. I personally think that Linkin Park is the worst thing you could possibly sound like and not something I ever particularly want to be reminded of. The final track on The Downside, â€œYou Could Be Anywhereâ€ is a bizarre choice for album closer, as itâ€™s the softest, most drawn out, and least interesting song on the album, causing the EP to end with a whimper. The remaining two tracks on the album, while significantly better than â€œSharp Tongueâ€ and â€œYou Could Be Anywhere,â€ still give us nothing particularly interesting to draw our attention, and ultimately wind up as forgettable album filler.

None of this is to say that Living Means shows no potential. There are a few bright spots here and there, and I think weâ€™ve all seen bands with much weaker starts than this going on to do really great things. But The Downside was released in April of the same year that Living Means claims to have formed, and the short turn around time shows through in an underwhelming start to their discography.

Ray Rocket: Do You Wanna Go to Tijuana?