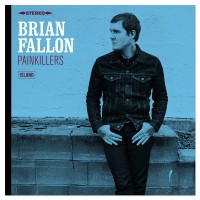 Much can be said about Brian Fallon's love affair with the past, but it is the one alarmingly consistent aspect of all of his music over the last 9 or so years. Be it The Gaslight Anthem hearkening back to Audrey Hepburn and Allen Ginsberg in their lyrics and song titles or the slow or the deep blues and soul twang of The Horrible Crowes, it is clear that Fallon wishes he was born between twenty and forty years earlier. Or he just really wants to be Bruce Springsteen, either way this solo debut from Jersey's fourth favorite son is the ultimate ode to times gone by.

Opening with the high energy and insanely catchy single "A Wonderful Life," the album oscillates between upbeat folk rock (â€œNobody Winsâ€) to slowed down balladry (â€œSteve McQueenâ€) to acoustic indie rock (â€œSmokeâ€) to classic blues-tinted rock nâ€™ roll (â€œMojo Handâ€). Then of course there are tracks like â€œRosemary,â€ that sound so much like Springsteen songs Iâ€™m convinced there is some underwriting (or at the very least voodoo) going on. Unlike some Fallonâ€™s contemporaries (the Dave Hause and Cory Brananâ€™s of this world), it appears that each song was really written to stand on its own two legs. While this leads to a collection of fairly compelling songs, it lacks the sense cohesiveness usually present in Brian Fallon productions.

More often than not I prefer my music on vinyl, but I feel as if this one with get old after the first pass through on my turntable. And yet, it has been on repeat on my Spotify feed for a week. Short burst, quick hit rock nâ€™ roll is not what I was expecting from this one and while it certainly isnâ€™t perfect, thereâ€™s a lot here to like for fans of all of Fallonâ€™s various projects and the multitude of influences he wears so very proudly on his sleeves.

Nothing: Tired of Tomorrow