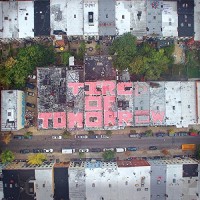 Nothing incorporated a lot of styles and elements into their last record, Guilty of Everything, which left me wondering if they'd repeat here or amp things up to a more aggressive nature. Given their guitar-centric approach to things, they're a band I enjoy more when they kick it up a notch. That doesn't happen much on Tired of Tomorrow as I'm left asking for some heavier moments which never come but that said, the record benefits from the melodic sprawls that Will Yip seems hellbent on producing lately. They move a rung up on the shoegaze ladder by toning things back even more than their 2014 record and what's even more noticeable is that quite a few directions taken here, ring similar to bands Yip worked on over the past couple years. Nothing, however, still have an extra something to their music.

Vocalist, Domenic Palermo, continues to drive home tales of despair and a very tragic past. This album's much more personal and ties in many twists and turns to match his moods. Acoustic segments, pianos and violins all play a part in crafting the beauty amid Palermo's agony. The opener "Fever Queen" nods to Alcest in its post-rock haze. Several rhythm sections on the album are built on these lush, atmospheric beds which riff off of alternative rock and black metal more than ever. Bands like Pianos Become The Teeth, Title Fight and Superheaven (all Yip productions) immediately pop to mind. This does take away from the impact of the album as I felt like I heard so much of this style sound the same over the last few years. The same can be said for "Our Plague" which is one of those tracks that begged for a noisy ending.

"Vertigo Flowers" details a physical assault Palermo endured recently and toys around the mid-tempo area with tracks like "A.C.D" fiddling on a '90s alternative rock beat. Again, adding much-needed diversity. The sludgy "Curse of the Sun" and "Eaten By Worms" -- which feels like a full-fledged Nirvana tribute -- also compound how the album's mixed. These songs help break the monotone vibe I personally get from too much slow shoegaze. By the time the record winds down, it's the self-titled closer (piano-driven) that bookends things on a note of positivity. It addresses why the album isn't loud. Palermo wants to forget the dark experiences and find a place of comfort. You can sense that he's one step closer to achieving this peace of mind as Nothing wrapÂ Tired of Tomorrow. I wanted it louder and angrier but as things end, it's all about closure. And it seems it's been gained.