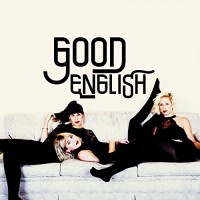 Even though weâ€™re only a few months into 2016, itâ€™s shaping up to be a big year for the music scene in my hometown of Dayton, Ohio. The latest release by Good English is further testament to that, their self-titled album proves to be the culmination of great songwriting and the knowledge of how to make your influences known without sounding letting them bury your voice as musicians.

â€œCarolinaâ€ opens the album with a series of snare hits, before guitarist/lead vocalist, Liz Rasmussen, brings in a riff that is reminiscent of the qualities youâ€™d find on an early Joan Jett and the Blackhearts album, as it is equal parts punk influenced rock music that flirts with pop sensibility. As soon as the vocals kick in, the song takes on a slight rockabilly feel on the verses. While Lizâ€™s vocals are solid on this song in every way possible, one of the testaments to the bandâ€™s songwriting abilities is their use of backing vocals, compliments of sisters Celia and Leslie Rasmussen. The song would hold up just fine without them being there, but the fact that they are present takes an otherwise decent song and turns it into a good one.

The next track, â€œOn the Run,â€ is more evidence to something Iâ€™ve been driving home a lot of late. Sequencing on an album is everything, knowing how to build up energy and take it away throughout an album is as fundamental to the overall success of that album as it is within an individualized song. After the hard rock of the albums opening track, the band drops the energy off completely with the next song. Opening with a much cleaner guitar riff and lead vocal delivery, and fantastic harmonization on the backing vocals, the song builds back up to a high energy rocker by the time the chorus arrives. Just as with the opener, itâ€™s the extra flourishes the band does that take this song over the top. At the onset of the chorus the band delivers a simple â€œHa!â€ and continues using it as rhythmic device throughout the rest of the chorus, in doing so they crafted one of the catchiest vocal hooks Iâ€™ve heard so far in 2016.

Perhaps the most straight ahead punk song on the album, â€œAtheist,â€ shows the band utilizing a touch of psychobilly on the verses again and brings gang vocals into play from time to time, before reverting back to three part harmonies in other places. The sheer simplicity of this track, musically speaking, makes it a great accent piece to the other songs on the album which draw from 70â€™s rock, early new wave such as Blondie and Talking Heads, elements of 90â€™s alternative, and tops it all off with a sprinkling of early to mid-90â€™s punk rock. It serves as an excellent accent piece in the middle of the later part of the album.

Elsewhere on the album, tracks like â€œGirl,â€ â€œWanderer,â€ and â€œCold Windsâ€ the whole bandâ€™s vocal abilities are put on display. While influences such as Debbie Harry, Corin Tucker, and even Marissa Paternosterâ€™s quieter moments come to mind immediately. There are also elements of people like Kurt Cobain and Frank Black present as well. To be this musically informed, especially in the age of the internet, isnâ€™t difficult for anyone. Taking elements of those vocalists and knowing what they are able to incorporate into their own vocal stylings is testament to knowing their instrument. While much of these vocals are delivered by Liz Rasmussen, what pushes her vocals and many of the songs over the top are the background vocals or vocal flourishes provided throughout the album by her sisters.

Of course, for vocal abilities this versatile to work a high level of musicianship is also required. And whenever the opportunity presents itself, these sisters rise to the occasion. For a band whose members are all still in their early to mid-twenties to sound this natural together, is a rare thing. That being said, theyâ€™ve also been playing together their entire lives as musicians. This allows them a unique understanding of one anotherâ€™s abilities and influences that not all bands can have when they release their debut album, thus making this a much tighter debut album than you get from many bands.

As far as debut albums go, I am willing to say I will be hard pressed to find one that is more fully realized this year. This album is the result of a band that not only has great songwriting abilities but also excellent musicianship and vocal talent. When you add all of that into a band that have this deep of an understanding of one anotherâ€™s musical histories, the results are almost always guaranteed to be positive. I canâ€™t wait to see how they continue to grow and develop their sound from here.

Nothing: Tired of Tomorrow