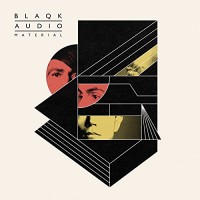 While itâ€™s not surprising that dancier, electronic elements have slipped into AFIâ€™s more recent albums, itâ€™s good Davey Havok and Jade Puget have Blaqk Audio. The side project allows them to dive head first into pre-EDM electronica. Material is their third attempt at mastering the sound.

Clearly, Havok and Puget have an appreciation for darker, moodier 80s bands like Depeche Mode and Sisters of Mercy. Their ability to weave those effects into more modern pop numbers is a feat of its own. For the most part, though, Blaqk Audio donâ€™t bring anything new. The two friends seem to be on the same page when it comes to artistic vision but itâ€™s singular, in need of an outside presence. When the two throw in heavier touches, such as the bass in â€œAnointed,â€ they see the most success. â€œBlack at the Centerâ€ proves the formula can work. Too bad these moments are sparse. Songs like â€œGraphic Violenceâ€ with its peppy feel and purposefully â€œedgyâ€ title donâ€™t have the same kick. Neither does club ready â€œFirst to Loveâ€ where you hear, â€œShe said, â€˜no oneâ€™s ever sent me flowers,â€™â€ and wonder if youâ€™re supposed to dance or feel bad. â€œYou Will Hate Meâ€ starts like a direct rip off of Robynâ€™s â€œDancing On My Ownâ€â€”a song able to find dance floor sadness better than anything hereâ€”but then veers back to more of the same.

The verses are constantly the most interesting parts in this batch of songs. Havok still tells an excellent story and their gothic romance relishes in more freedom. But the big hooks donâ€™t connect, swinging too hard for something both underground and mainstream. This is a feat these two have accomplished before, but on Material, it always sounds just out of reach. Thereâ€™s plenty of reason to tap your feet but so little to latch onto.

This isnâ€™t urgent music no matter how hard it wills itself to be. It acts as a tribute to their heroes. Havok and Puget stay true to the source material but never add anything beyond crisper production. However, in the last ten years, Blaqk Audio have released as many albums as AFI, so clearly the project is here to stay.Â

Crown of Thornz: Nothing But Tragedy [single]