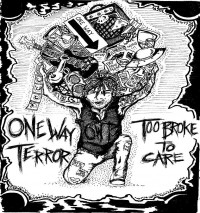 One Way Terror hail from Buffalo NY. They have been around for almost a decade and still continue to play louder, faster, and heavier than ever. This album came out in 2014 but it deserves to finally get some recognition!Â

To kick off this 10 track assault is a song called "Keeping Score". This one kicks in hard and fast. It's a credit to the band that although this record has a clean professional sound, this song (and the rest for that matter) are as dirty and as raw as it gets. The chorus of this one is one that makes you want to chant along and definitely gets you pumped.Â The next track (Sheepdip) has a little more of a metal edge to it -- kind of riffy in the beginning. That's one thing you'll notice as you listen through this record; there is a perfect blend of street punk and metal/thrash. It's what makes their songs so appealing to a lot of different people.

Their lyrics stem from personal struggles and stories of things going on around them. This is evident in songs like Enola 51, 8hr Shift, my contribution, and Millionaires. These are guys who take pride in the underground punk movement, playing basements, and just having a good time. It's cool to hear a band that can write stuff that can holds its own against any upper level punk acts but still be playing basements and write lyrics that are still relatable to working class punks (which is what these guys are).

Track 9 is the title track to the album, "Too Broke to Care". This is my personal favorite off the record. The opening riff is catchy and a nice buildup before the song erupts. It's cool too that the song doesn't carry on too long either. It hits the nail on the head and doesn't miss a beat. The chorus is catchy and the lyrics are something we can all relate to as well.Â

All in all this is a great album that you'll want to listen to on repeat. The mix of punk and thrash is great. There are cool guitar licks and solos sprinkled throughout too that keep things interesting. On top of that they have catchy sing along choruses that make you want to start a pit in your living room. The speed and aggression here is fabulous too! Way to represent the Buffalo punk scene boys!

Posture and The Grizzly: I Am Satan