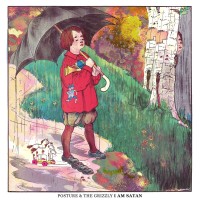 Posture and The Grizzly

Posture & The Grizzly are one of the most underrated acts around. Bits of power-pop, mostly indie and punk. Busch Hymns was one of the best things that came out of 2014 and I Am Satan follows in the same vein. Very tongue-in-cheek and full of obnoxiously-written singalongs. Think of Blink 182 meets Joyce Manor with a bit more emo stuck in. This album feels like it addresses its predecessor as well as past EPs in looking to move out on its own. There's much more of an owned sound as opposed to comparisons reflected when you took in their previous work.

While "Raspberry Heart" has tinges of Tom Delonge's vocals from Jordan Chmielowski, it's the upbeat punk aspect of tracks like this that sets the tone. In fact, the first few songs follow this pattern - infectious, lively and very catchy. A lot of the melody is laid down byÂ Derrick Shanholtzer-Dvorak's guitars (TWIABP) which compensates for the less aggressive downshift from 2014. "Shooting Sparks" illustrates this as an instrumental which nods to "Jordan Michael's Space Jam" from two years ago. I love how they incorporate more acoustic segments as well to breathe some space into the tracks, whose production feel like the right balance of raw/demo and properly polished. Another positive is how the lyrics evolve as the album progresses, getting deeper and much more adult-themed, showing the range of emotions Posture & The Grizzly roll through.Â

Laying these down over a series of bouncy hooks, start-stop riffs and energetic slow-laced punk makes for another pretty exciting listen. It's clear the sound's grown since Busch Hymns but the essence of the band hasn't been lost. Still restless. Frustrated. Angsty. Angry. See the bass-heavy punk banger in "Acid Bomb". Â Feels like something from Dude Ranch. Just like their older albums, there's no formula here. You can sway from a punk trip to a slow, melodic lull and then back to something to get into the pit with. The latter track dives into one of these beautiful breathers in "Delete Me" -- addressing broken romances and tragedies. As much as I like their angrier stuff, I admit it's when they dial things back, I'm most impressed. It's another highly versatile album that's as creative, unexpected and artistic as you'll get. Full of imagination. Spunk. And middle-fingers to everyone you fucking hate. Yet amid all this, there's a sweet portrait of something gorgeous painted. The last couple tracks acoustically point to this -- and it's that bittersweet thing called Life.Â

One Way Terror: Too Broke to Care

Ought / Priests: live in Cambridge