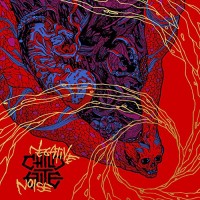 Child Bite can be a hard band to love, but ultimately itâ€™s worth the effort. For more than a decade, the Detroit quartet has been cranking out challenging music for the adventurous listener. For the last five years or so, Child Bite has really been focusing on the heavier aspects of their weirdness. Their bio mentions Black Flag, The Jesus Lizard and Voivod. I think thatâ€™s a pretty good place to start. The primitive, primal hardcore of Black Flag, the chaotic noise of The Jesus Lizard and the spaced out metal of Voivod. Iâ€™ve been fortunate enough to see Child Bite work their magic on a live audience on a number of occasions, usually opening for old punk bands. (The Meatmen, Naked Raygun and Poison Idea are the first to come to mind.) The vast majority of the audience is blown away by their spastic, energetic performance. The rest just sort of stand there shaking their heads and wondering what the hell just happened. I suspect people's reactions to this record are going to fall along similar lines.

Negative Noise opens with its shortest song, the under two minute ripper â€œDeath Before Dementiaâ€. Itâ€™s a more realistic take on the whole â€˜hope I die before I get oldâ€™ thing. On â€œParalytic Phantasmâ€ the bass carries the riff while the guitar seems to beam in from another dimension. â€œVideo Bloodâ€ gets into the positive, cathartic effects of violent movies and video games. â€œApex of Anxietyâ€ will probably make you feel, well, anxious. It even includes what sounds like a nervous breakdown by Child Bite frontman/mastermind Shawn Knight. Knightâ€™s voice sometimes sounds like a more muscular, menacing version of Jello Biafra. While the whole band is great, itâ€™s Knights frantic insanity that really elevates the music. The lyrics are nihilistic and sometimes absurd and delivered with the fervor of a raving lunatic. He seems to throw himself into the songs with a reckless abandon.

â€œBorn a Hogâ€ has what could be described as a rapid fire marching beat. Itâ€™s a scathing indictment of our greedy consumer culture. â€œVermin Mentalityâ€ is vintage Child Bite. Itâ€™s driven by a winding riff that could have come straight from the fingers of Greg Ginn. The bleak, nearly seven minute â€œBeyond the Dirtâ€ slows things down and adds some Black Sabbath to the Black Flag. â€œThe Great Ego Floodâ€ takes a poke at our narcissistic obsession with social media. Child Bite covers a lot of the same topic as other like-minded bands, but they always seem to find a different angle or unusual approach. Negative Noise has 12 songs and is over 47 minutes long. While each individual track is enjoyable, by the time you get to the end of â€œFeed Me Septic Dreamsâ€, youâ€™re likely to be exhausted. Mostly in a good way. The album might be best described by its third track, â€œEuphoria Saturation Pointâ€. I hate to criticize a band for giving the audience their moneyâ€™s worth, but this is probably best experienced one half at a time.

Negative Noise, Child Biteâ€™s fourth full length, was produced by Phil Anselmo and released on his Housecore Records. The record sounds great and has very crisp production for something this noisy and chaotic. Love him or hate him, Anselmo seems to have a good ear for finding interesting underground bands. The artwork was done by vocalist Shawn Knight and both the LP and CD are very nicely packaged. Detroit seems to have an abundance of great bands at the moment. They cover a wide range of aggressive styles, with their lack of faith in humanity being their common thread. Child Bite is one of the key bands in that scene. This is for the open minded punk, headbanger or weirdo. If you like your music a little on the ugly side, you owe it to yourself to check them out. (Especially if you get a chance to see them live.) Negative Noise can be a hard record to love, but ultimately itâ€™s worth the effort.Â

Praise: Leave It All Behind