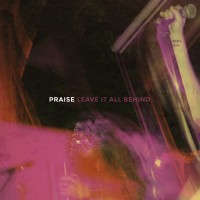 Praise has been a band for a pretty long time. I remember when they were still more of a hardcore band opening for Title Fight in 2010 or so. Nevertheless, Leave It All Behind finds the band at their most polished. Produced by Will Yip, the album has a great melodic sonic edge thatâ€™s a nice meeting point between hardcore and punk. While their sound has always somewhat been more melodic, Leave It All Behind demonstrates a fresher chapter for Praise. The band features members of hardcore bands like Turnstile, Mindset, and Angel Du$t.

In the veins of all melodic bands that come from the ashes of hardcore, Praise indulgently run through a 7 song EP that at times takes it time and other times paces quickly. â€œLeave It All Behind,â€ the albumâ€™s title track is 90s post hardcore type song in the veins of plenty of bands wrapped into one. The influences are there and Praise tries their best to builds off of it. â€œWalk To The Edgeâ€ shows the bandâ€™s softer side and their more creative side as the guitarâ€™s lead shimmers throughout most of the song. The album ends with an Egg Hunt cover that somewhat does the extremely short-lived band justice, the song just makes the EP feel incomplete. The song is simply there to show just where the bandâ€™s influences lie and how theyâ€™ve factored that sound into their own songs.

Overall, Praiseâ€™s new EP has a great polished recorded sound but the songs feel tiring. Weâ€™ve all heard the hardcore bands becoming more melodic or joining other groups, but usually the band has something fresh to offer. What Praise presents to their audience almost feels like a rehash of 90s post-hardcore bands like Quicksand and Fugazi. While Praiseâ€™s new EP isnâ€™t bad, itâ€™s not the best coming from members of other impressive bands.