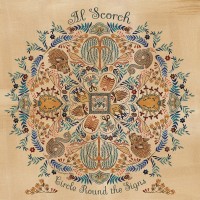 Al Scorch is playing around with a sound that's been in play for almost a hundred years, but give him credit, he knows how to use it. Circle Round The Signs is a fun, deeply alive folk punk album that could easily pass in instrumentation and spirit for the bluegrass and country folk on The Anthology of American Folk Music a la "I Wish I Was A Mole In The Ground" and any Alan Lomax compilations. The accordion, fiddle, guitar, and banjo arrangements here are in exactly that kind of fast, rhythmic style that connects punk, honky tonk, and folk in a tradition of crowd-pleasing ecstatic joy.


Scorch's lyrics too are in that uneasy mix of the political and personal that have driven folk music for years in some form or another. His songs are hungover but also alive and excited - "Insomnia" starts as a slow, low key ballad as the narrator wakes up to another crappy day: "Birds sing in ignorant bliss/And I'm feeling lucid/And no dream cause I'm a mess," then the song explodes in the second half as the instruments build on each other, Scorch singing as if he's dodging bullets. The poetry in the writing and melodies, like any decent songwriter then finds beauty even amid deep despair. The best song however for my money is "Poverty Draft" - the guitar and trumpet arrangement isn't totally original but Scorch channels Springsteen and protest songwriters in the brutal, forgiving narrative of being poor in America, where "this cycle of sickness remains".


Circle Round The Signs is a fine folk album, one that finds, like a lot of folk punkers, transcendence amid pain and misery. It's well produced, well written, and definitely worth a look if you like your music with a touch of roughness and humility. It's a soundtrack for those who have failed but will just keep trying because that's all they can do.

Weedeater/ Today is the Day: Live in Grand Rapids