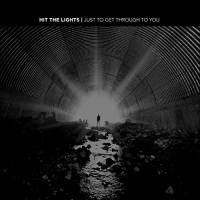 I am a sucker when it comes to acoustic music, from folk classics to cheesy renditions of pop punk and pop rock, if it came out acoustic there is a good chance I have taken a listen. The heavily produced pop rock (punk?) style of acoustic is what we have here with Hit The Lightâ€™s most recent release Just to Get Through to You.

Hit The Lights have compiled songs from three past full length albums, including a song from both This is a Stick Up, Donâ€™t Make it a Murder, and Skip School, Start Fights, with the bulk of the songs coming from their most recent full length Summer Bones. The band has included one new song titled â€œLighthouseâ€, which in contrast to the re-recorded fan favorites included on this release falls a bit short. â€œLighthouseâ€ is even more produced and radio friendly than the bands past material, falling somewhere between Mariannaâ€™s Trench and Hedley as opposed to the bouncy pop-punk the band has been known for in the past. Despite the benign, and furthered teen oriented direction of the new track, fans of the band in general will likely enjoy the EP.

This seems like a release to bridge the gap between full-length albums, and is by no means innovative, but is likely to please previous fans of the band as well as steadfast supporters of Pure Noise Records. If you donâ€™t already know Hit The Lights or dig this style of heavily produced pop punk, this release wonâ€™t be for you, but if you happen to be looking for softer acoustic renditions of past Hit The Lights songs, Just to Get Through to You is worth a quick listen.Â