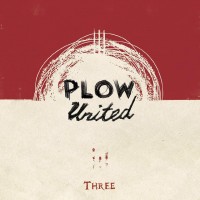 Plow United got better after they got back together. Plain and simple. They were always pretty good but after their reunion, I'm not sure if it was something about keeping up with the times or aiming to stay relevant, which in all fairness they never had to, but their music felt as organic and energetic as ever. Not bucking the trends and style of old but just packing more fizz. They came back as Â fast, catchy and as punchy as I hoped for, and then some. Marching BandÂ emphasised this three years ago and as far asÂ ThreeÂ goes well, once more, it's Plow United delivering at their finest.Â

I've always found their records to be a tad front-loaded and Three kicks off in a similar vein. The first few tracks are gruff, frantic and emblematic punk affairs you'd usually associate with the band. "We Should Take Time", "Break The Barrier" and "Everything" couldn't be more perfect to launch the record with. They're raw, melodic and full of energy, reminding me of how hungrier the band sounded when they got back on the horse in 2011. What I love even more is how personal and more intimate their stories are -- touching on religion, society and all things Americana. These opening missivesÂ remind us that no matter the era, they'll always find a place and stand tall. As expected, Three's laden with speedy riffs and bouncy hooks -- in other words, they don't reinvent their sound much.Â

The screams on "Going Dark" and the skate-meets-classic punk nature of "Bright Eyes" ramp things back up toward the end but by then, there aren't too many gripes or points of contention you can seriously have with record. The end shreds more than I expected and as the harmonica closes things off on "Try", it's anÂ exclamationÂ mark of how engaging Plow United are. They don't mix things up too much, but they've got enough character to subtly throw a curve ball here and there and still win you over. AsÂ consistentÂ as ever.Â