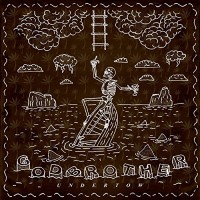 On their debut EP, Undertow, Brooklyn-based Godbrother give us five songs that can be entertaining to listen to but, ultimately, fail to engage or excite in any way.

â€œTuesday Night; Foxâ€™s Loungeâ€ starts off the album with promise- a fun rolling snare dive into the first verses with some snappy guitars and a simple if effective beat. The first cracks begin to show, though, when a poorly executed pick slide tries to fill a gap before the song picks up again and falls flat. Towards the end the song reaches a crescendo of an angrily yelled chorus and some questionable drumming that is cause enough for worry about how the rest will pan out.Â

The other four tracks on the album come across as about the same, either ending up just a bit above or just a bit below the average mark. There IS a part in â€œKick Rocksâ€ where the drummer brings in a stuttering set of quick snares and hi-hats that was my favorite of the album. The band employs a steady stream of backing vocals which help a bit to buoy up the songs, with quite a few "whoas" spread out here and there, but it isn't enough to break the spell that they're just running through the motions.

On their Facebook page, Godbrother claims that â€œWe play old man pop punk.â€ But there doesnâ€™t seem to be anything pop punk about their music. Pop punk tends to be more energetic music with a quick tempo, whereas Godbrother is mildly upbeat at best, and a bit sloppy and/or lackadaisical at times. If anything, in both composition and vocal styling they reminded me of nothing less than an indie-rock version of Seaweed. The swell and dip of music and vocals in several parts gave me severe Seaweed flashbacks. One song even has a slow, deliberate (some would say plodding) pace that they so regularly employed.Â

Godbrother likely puts on a fun live act, and after a couple of beers Iâ€™m sure Iâ€™d find myself singing along to the â€˜whoaâ€™ parts. In the end their biggest fault is simply that the songs arenâ€™t very unique. There are no standout tracks, and no parts that give you chills and make you mouth the word â€œwowâ€ to yourself. The songs or OK, and there are some neat-o parts to be sure. But niggling in the back of your head is the suspicion that youâ€™ve heard each of them a thousand times before.

The Coathangers: live in Denver