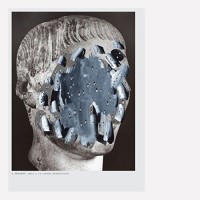 Just the existence of A New Wave of Violence is a miracle. Head Wound Cityâ€™s debut full length has finally arrived ten years after their lone seven-song, ten-minute EP. Thatâ€™s not to say the members of this supergroup have taken any time off.

The biggest name is, of course, Nick Zinner, the Yeah Yeah Yeahs guitarist who takes the biggest leap from his main band. Head Wound City feels like his way to scratch a much bloodier, oozier itch. But the other four occupy a space comfortably in their wheelhouse. The Locustâ€™s Justin Pearson and Gabe Serbian, who have both been in about thirty other technically charged bands since the EP, long ago carved their niche in furthering aggressive, abusive music. But itâ€™s Blood Brothers Jordan Blilie and Cody Votolato whose looming influence can be heard most. Blilieâ€™s screams are front and center and as hard to decipher as his earliest works. He abuses his voice for the good of the record only slowing down a bit for â€œI Cast a Shadow for Youâ€ and â€œLove is Best.â€ Those two are, by comparison, the slowest songs in the bandâ€™s tiny catalogue and provide a brief yet menacing break before the aural tornado continues.

While theyâ€™re no longer the young men they once were, the aggression hasnâ€™t worn off. If anything, age has given them more to be pissed off about. It does sound better than their EP partially thanks to Ross Robinsonâ€™s genre defining touch but also because of the years of experience. Guitars tangle into each other and knowing which parts are Votolatoâ€™s vs. Zinnerâ€™s is anyoneâ€™s guess. Call whichever one you want a lead, theyâ€™re both playing as hard and fast as possible. However, it's Serbianâ€™s drums that are the highlight, whether keeping you in a zone or taking you into full spaz mode. â€œScraperâ€ feels as though heâ€™s slowly leading you up rollercoaster tracks before a drop straight south.

The album clocks in at a mere twenty-five minutes, but doesnâ€™t waste a second. Is it punk? Is it hardcore? Who cares? A New Wave of Violence is a perfectly titled blast of energy made by the best there are. Be happy it exists because thereâ€™s no promise of a tomorrow with guys as busy as these. Luckily, each member contributes to many other projects that refuse to occupy a genre. Hearing them together is truly a brutal delight.Â

The Coathangers: live in Denver