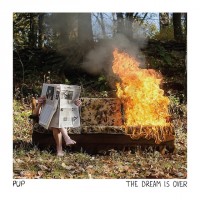 PUP's 2014 self-titled debut was their way of introducing you to their brand of indie/pop-punk, but more so, catchy, spunky punk with attitude for days. The Dream Is Over finds the band building on their gang-vocals and shout-along anthems, becoming even more unhinged, louder and much more direct than ever. To say this record is full of intent, more than the last, would be a gross understatement as the album's title plays off the doctor's message to singer, Stefan Babcock, after damaging his vocals. In fact, almost all the tracks address the things in life we're told we can't or shouldn't do. And in true punk fashion, PUP, tongue-in-cheek and sarcastically, paints a big message of here of saying fuck the doubters.

Songs like "Dark Days" and "Cul de Sac" can be felt reverberating on this album. Message-wise and musically. I love how they built on the foundation laid down from these tracks a couple years ago when I praised them right up there with the likes of Masked Intruder. They continue to pack a lot of emotion into their music and you feel it in the gang vocals on nearly every song. From the turbulent, buzzy guitars and frenetic pace of "DVP" (which addresses drunken rants and continues to elaborate on juvenile days in the Don Valley area) to the cynical screams on "If This Tour Doesn't Kill You, I Will" Babcock and company detail a lot of the toll that making music takes. Mentally and physically and how they grew with it, rolling with the punches. Big hooks, melodic riffs and bouncyÂ rhythmÂ sections flock The Dream Is Over once more with slow, burningÂ nuggetsÂ of life in small towns cropping up as well on "The Coast". The lyrics speak on the mining villages and wanting to leave for bigger, brighter city lights which are a big contrast to the immature stories PUP tell on the rest of the songs. Interesting balance but one they've always pulled off well.

Nestor Chumak's bass continues to thump as steadily and as heavily as ever, laying down a strong spine for Zack Mykula on drums, the latter finding himself more controlled and not as prominent as on PUP. They all blend together so well and Steve Sladkowski's guitars help Babcock frame a record that feels more melodic yet more aggressive than I first anticipated. Dark in humor, taking shots at themselves but filled with technical showmanship and punk mechanisms that even their biggest doubters can't deny are pretty above the curve. Â "Old Wounds" explores a darker, Drive Like Jehu kind of sound (which feels like countrymen Single Mothers) cutting PUP loose in a way I really haven't heard before. Babcock digs into every ounce of catharsis inside him and waxes on the metaphors in life that chew you up and swallow you, reminding the listener of how his writing's improved due to the last few turbulent months he endured.Â

Frustrated, restless but relieved after coming back from a near-musical grave as the poppy "Can't Win" dictates. This track in particular embodies a lot of what The Dream Is Over is about. Situations that seemingly peg you as an underdog destined to fail but no matter what, you're encouraged to overcome. By the time, "Pine Point" unwinds, you'll be even more familiar with PUP and their personal stories. It closes off the record on a tragic note but again, it speaks to the light on the horizon. Spinning the record with such positivity and making fun of the weights of the world worked wonders for Babcock's team. Very versatile and loaded with replay value, prep yourselves for one of the best records you'll hear this year.Â