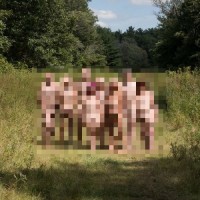 The Hotelier are definitely one of those bands who'll always invoke commentary on the emo revival. Home, Like Noplace Is There was a main reason why a couple years ago. And Goodness will certainly continue to incite that conversation, for those willing to drag it on. The Hotelier, however, manage to smartly keep their distance from the debate and just stick to making emotive, moving music. As I fell in love with "Your Deep Rest" in 2014, it's safe to say those like-minded will find quite a few tracks to gravitate towards here. Is it the best in their catalog? Sadly, no. But as expected, it's profound enough to keep me more than vested in a band that doesn't seem to ever take their foot off the gas.

The themes bouncing around on Goodness are all too familiar. Christian Holden's clean-cut vocals continue to touch on personal growth, transformation, loss, missing loved ones and moving on. The record is steeped heavily in the damages we sustain in life and how we should appreciate the short time we have. So many of the songs bask in the warmth with mid-tempo strumming glossed over by the shimmery sections we're accustomed to from these guys. "Piano Player" is a prime example of this. It propels a lot of the messages and melodies that spill over from the last record and which I must point out, have a few crafty interludes. Spoken word, acoustic breaths and pianos separate the heavy content on tap -- and are going to be a hit or miss. No in-between. "Goodness Pt. 2" also indicates earlier on that the record's minimal, with its rhythm driven by percussion. I like that The Hotelier don't feel the need to overdo it on the technical aspect of things and even when they do, it fits.

That said, most songs linger too long in the mid-tempo area which hurts the record. I think dirtying the production up, going louder, taking a few screamo risks would have lent more to what they're saying. They don't feel as dynamic as I anticipated. "Two Deliverances" though, shakes things up slightly with its warm and breezy '90s alternative feel while "Settle The Scar" unravels in a manner that fans of Tiny Moving Parts, Sorority Noise and Annabel would appreciate. "Opening Mail For My Grandmother" joins the pack with a structure that reminds me a lot of Into It. Over It's "No Good Before Noon" and all these are the bigger wins on tap. These all point to the band paying homage, not just to musicians and songwriters of old, but to the current wave within their genre. They ape their contemporaries here but add enough of their own spin to get you involved. And keep you knitted in. The closing few tracks aren't as strong as I envisioned but overall, Goodness hits the majority of marks it aims for. Interested to see where they go from here given that this release was supposed to be a joint one with Collect Records. Until 'Pharma-bro' fucked it up, that is. Who knows? Maybe The Hotelier has a rougher edge for the future.