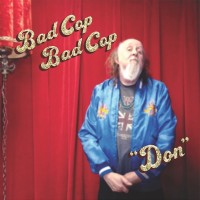 If you are anywhere near aware what has been going on in the Los Angeles punk scene then you should already know the bands Bad Cop/Bad Cop and the Barb Wire Dolls. The members of Bad Cop/Bad Cop are LA/SoCal natives, while the Barb Wire Dolls are originally from Greece, but have made the City of Angels their new and seemingly permanent home. The two bands have come together and contributed one song each for this split and both songs seem to be on different ends of the punk rock spectrum.

Literally both sides of the vinyl version says that each side is â€œSide-A,â€ so Iâ€™ll start with Bad Cop/Bad Copâ€™s side first. Their track is called â€œDonâ€ and based on the liner notes and the lyrics, â€œWell Don thinks weâ€™re his favorite band and he wants us to play his party,â€ it seems that this song was written for one of their biggest fans. This is much more on the pop-y, bubble gum side of the bandâ€™s sound. They still show their mastery of three-part vocal harmonies here, too. With this song Bad Cop/Bad Cop seems to base the instrumentation on this early, traditional 60â€™s surf rock vibe with the rhythm of the chorus and the way they added some â€œoohâ€™sâ€ and â€œaahâ€™sâ€ over the lyrics. But the members also updated that 60â€™s surf rock sound by giving that an aggressive pop punk edge that they did so well on Not Sorry by including angry vocals and hard-hitting and scratchy power chords through out the verses. The way they mixed the two sounds is what makes this song into a very fun pop punk tune.

On the â€œother A-sideâ€ is the Barb Wire Dollsâ€™ track called â€œSurreal.â€ Now while Bad Cop/Bad Copâ€™s song was very much on the pop punk side of things, â€œSurrealâ€ very much embraces the 90â€™s grunge sound. The song is reliant on a slow and choppy bass riff that is eventually mimicked by a sharply distorted guitar. The verses then seamlessly transition into a faster and smoother chorus where you can hear more distinct guitar riffs that vaguely follow the vocal melody. The lead singerâ€™s voice is more laid back and more relaxed, especially when you compare it to the other track on this 7-inch, but at the same time it is also filled with a lot of warmth and a remarkable amount of emotion. In the same way Bad Cop/Bad Cop took a retro 60â€™s sound with â€œDon,â€ the Barb Wire Dolls put some interesting and updated touches to 90â€™s rock with â€œSurreal.â€

This split is a good addition to the material both bands have released before it, but that is exactly what it is â€“ an addition. Fans of either or both Bad Cop/Bad Cop and the Barb Wire Dolls will be pleased with it, but for those who are not familiar with either groupâ€™s previous material, itâ€™s probably best to start elsewhere in their catalogues and then come back to this.