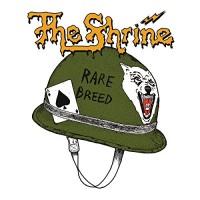 I caught The Shrine opening for Clutch and Corrosion of Conformity last year, and I must say, I was pretty impressed. Unfortunately, I ran out of merch money before I could grab one of their albums, so Rare Breed is my first taste of the LA trioâ€™s studio stuff. I suspect that will be the case for a lot of people as the band makes the leap from the tiny Tee Pee Records to the metal powerhouse Century Media. While The Shrine is most easily described as a stoner metal band, they also incorporate elements of skate punk. Itâ€™s like if Monster Magnet and Black Sabbath collided with JFA and Ill Repute.

Rare Breed opens with two fast ones, â€œComing Down Quickâ€ and â€œDeath to Invadersâ€. The title track and â€œWhatâ€™s Left For Me?â€ slow things down and add more melody. Pretty much every song here is catchy and packed with drug references, great riffs and scorching solos. The young guys in The Shrine look a bit like extras from a 70â€™s biker movie, and â€œSavage Skulls and Nomadsâ€ is a song about biker gang violence. There are Vietnam War themes sprinkled throughout Rare Breed, with â€œThe Vultureâ€ being the most obvious. â€œPull the Triggerâ€ is an extended guitar solo. Itâ€™s probably what â€œEruptionâ€ would have sounded like if Eddie Van Halen had been really baked.

â€œDusted and Bustedâ€ feels like an anti-drug public service announcement, or at the very least a cautionary tale. â€œNever More Than Nowâ€ is a two minute blast of punk fury, while â€œSpace Steppingâ€ is trippy and seven minutes long. The last two songs are listed as bonus tracks, but I donâ€™t believe I have any kind of special edition. I hope these songs are on every version because theyâ€™re both really great. The first is an even rawer take on â€œNever More Than Nowâ€ featuring Keith Morris on lead vocals. (Morris is no stranger to stoner metal. He also sang on â€œBultacoâ€ from Fu Manchu's 2001 LP California Crossing.) They wrap things up with a pretty straightforward take on the Black Sabbath heavy classic â€œSymptom of the Universeâ€.

I like The Shrine a lot, and I think you could too. If youâ€™ve been feeling disappointed (like I have) by how wimpy a lot of the modern punk stuff is, this might just hit the spot. Itâ€™s metal with plenty of soul and a punk attitude. Rare Breed is an impressive album and a good place to start with the band. Next time you're skating a bowl, or smoking one for that matter, this just might be the perfect soundtrack.Â

The Wilding Incident: Prey for the Wolfpack

Belvedere: The Revenge of the Fifth