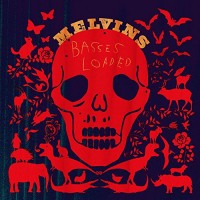 The Melvins have a penchant for oblique album titles. You need look no further than The Bride Screamed Murder, Lysol, and Houdini for that. Thatâ€™s why itâ€™s note worthy that the band is so direct on the title to their latest album (and second in 2016!) Basses Loaded. Both of the main Melvs, Buzz Osborne and Dale Crover, are big fans of the national pastime, so the album not only pays homage to the duo's other passion, but draws an interesting parallel to the bandâ€™s current manifestation.

For the past five years or so, the Melvins have maintained their core base of Osborne and Crover while basically swapping bassists in and out on an inning per inning basis. Osborne has referred to this strategy a few times, saying that he was tired of the prolonged fallout of permanent members leaving the band- so the band never wanted to depend on anyone else full time again. The result has been album after album, Ep after Ep, of the band jamming with new and old faces, switching around their lineup. Sometimes they cut tunes with half of the Butthole Surfers, sometimes they brought in Trevor Dunn on acoustic bass, sometimes they ripped through punk bangers in a modified version of their â€™83 lineup, and sometimes they called on old pals Big Business and reverted to their now classic mid-aughts four piece incarnation.

It was a smart strategy. The constant switcheroo found the band delving into different aspects of themselves and their compatriots, making each album its own piece rather than â€œjust another album by a long running band.â€ Iâ€™ve previously drawn comparison to the jazz heroes, who would jam with different talents on each release, and I stand by that synopsis. The Melvins are a band that lets their friends play, as did Miles Davis to John Coltrane, and the result is certainly greater than the parts.

Yet, while Basses Loaded seems to be a sampler of that mindset, with the band playing with SIX different bassists across their set, something new becomes evident and the album title makes that much more sense: The Melvins know how to deploy their players.

The best baseball managers are known for having the skill to know when to pull players out and put others in, as well as stacking the lineup. Here, the Melvins, instead of just â€œjammingâ€ with different bassists, deploy their thundersick regiment with a Roman skill. Opener, â€œThe Decay of Lying,â€ finds the band teaming up with current tourmate Steven McDonald who is famous for neo-power pop group Redd Kross and now neo-hardcore titans OFF!. The suggestion is that the band would use McDonald in a revved up, flighty tune or a super fast smasher.

They do neither. Instead, the band pulls hard on the breaks and pulls out a classic Melvins rumbler with â€œThe Decay of Lying.â€ With its stomping, lagging beat, sinister overtones, and Osborneâ€™s wail, the song sounds like a cross between Hawkwindâ€™s Warrior on the Edge of Time and Sin after Sin Judas Priest. McDonald for his part, revels in the murky, dark waters of heavy bass and the bands releases one of their finest, and most atmospheric songs to date. Who knew this power-popper had such evil inside of him?

Likewise, when Crover is pulled from the drum stool over to the four string, we see a new side of the blonde basher. In interviews, Osborne is usually the guy making wry, cagey comments, while Crover hangs backâ€¦ every once in a while offering up a little snag, suggesting that perhaps, something twisted is behind that platinum brow. He proves it here. All of the four Crover selections, â€œBeer Hippy,â€ â€œTake Me Out to the ballgame,â€ â€œPhillis Dillardâ€and most notably, â€œShaving Cream,â€ feature a slithering, dark humor. Osborne might be singing about a baby drowning in shit on â€œShaving Cream,â€ but the way Crover adds a macabre bouncing bass line to the tale of terror, you can tell that heâ€™s really enjoying the passion play the band is presenting. (And Crover is the family man of the group!)

Yet despite the albumâ€™s small army of collaborators, itâ€™s a surprisingly compact release. The Melvins often like to play with format and song structure, releasing some songs that barely break the 60 second mark and also 12 minute epics (or the mighty hour long Colossus of Destiny). Yet here, the songs are mostly well within fair radio play times, though, on â€œWar Pussyâ€ and other songs, the band flips off conventional verse-chorus structure and indulges in song growth, rather than song length. Like Hawkwind and Chrome, the band sets a hard rumbling chassis at the bottom, and continually builds crazier and wilder experiments on the top, pushing the song into freakier and freakier stationsâ€¦ sometimes. Both the Krist Novoselic jam â€œMaybe I am Amusedâ€ (McCartney reference?) and the Beatles cover â€œI want to tell youâ€ embrace the concept of a snappy song for the sheer sake of having a snappy song.

Yet, with all these contrasting angles and despite the roadhouse crew bringing up the lower end, the album flies by breezily. Although the band has legion of dispatched formers bassists in their wake, it appears the band does play well with others. And not only that, they know how to use â€œothersâ€œ to great potential. One must be careful of reading too much into the baseball angle- the title probably is just a silly joke after all. Yet still, plenty of teams stacked with talent fail due to misapplication of skillset. Here, there is keen insight into what the players are able to doâ€¦ even if it wasnâ€™t evident on the surface (see Mcdonald and â€œDecay of Lying , againâ€). Connie Mack, John McGraw, and Tony LaRussa would be proud.

Belvedere: The Revenge of the Fifth