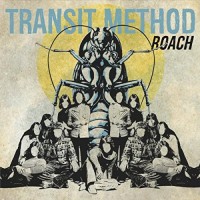 The new EP Roach from Austin based Jersey boys, Transit Method, may be a very short two songs, but it sure does pack a lot into a mere two songs. I was put off at first by the EPâ€™s title, not because it reminds me of those disgusting little bugs you find crawling around in unclean bathrooms, but rather because it brings to mind Papa Roach, that disgusting little nu-metal band that you find crawling around on crappy radio stations. Thankfully, the EP and its title track bear no resemblance to that nonsense. Instead, this EP gets a few extra points for calling to mind one of my all time favorite bands: Janeâ€™s Addiction.

No, Iâ€™m not saying that this EP is derivativeâ€”far from itâ€”but it does share that powerfully epic combination of punk, metal, and powerful, dynamic vocals. Vocalist Matt LoCoco may not exactly be as good as Perry Farrell, but heâ€™s certainly talented and has a great range. Transit Method refers to themselves by the bizarrely vague genre classification of â€œpower-rock.â€ Their press release was my first time hearing this term, and I canâ€™t find anything about it on Google, so Iâ€™m pretty sure that Transit Method just invented their own genre name for themselves, and I canâ€™t decide if I think thatâ€™s bad-ass or pretentious. But whatever you call it, Roach is a densely layered album from a talented group of musicians that calls to mind some of the more truly epic moments of Ritual de lo Habitual. Iâ€™m using â€œepicâ€ quite a bit in this review because itâ€™s the word that most comes to mind when listening to Roach.

The title track, as far as I can tell, seems to be about being an actual roach, or whatever metaphor of a roach you want to interpret it to be without me having to put my teacherâ€™s cap on. The lyrics of the second track, â€œWait to Drown,â€ are not on the bandâ€™s website, so I can hardly tell what that song is meant to be about, but the repeated chorus at the end of â€œSave the valuables/Wait to Drownâ€ is a great two line poem in and of itself.

Transit Method has put out one full length and three EPs, including this one, and are still flying quite low below the radar at this point, but this is a certainly a band to keep an eye on. If there is one thing that roaches are good at, itâ€™s sticking around.

Frank Turner and the Sleeping Souls: Live in Grand Rapids