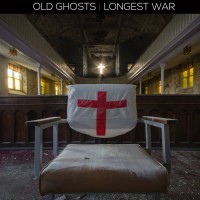 I was compelled to pick up this split because of the connection Old Ghosts have to past Buffalo hardcore band Dead Hearts, as vocalist Derek Dole handled vocal duties in both bands. Upon closer inspection I learned that Longest War featured members from Chokehold and Achilles, and needless to say, I was sold.

The split starts with the Old Ghosts side, which features a fast, dark and melodic sound that is very similar to Dead Hearts and Modern Life Is War. Both songs are under the 2:00 minute mark, and pack a pretty hard punch. The only draw back to these songs is the fact that they remind me how much I miss Dead Hearts, but that fact aside, these are well produced, fun, melodic hardcore songs. While it is hard to judge a band by two songs that barely break three minutes put together, I am definitely interested in checking out the rest of their catalogue.

Longest War provide a heavier, more metallic take on hardcore; which makes a nice contrast to the melodic aspect of the first half of the record. â€œWeâ€™re Only Temporaryâ€ is a strong point on the split, with a nice build up into a hard breakdown and crisp two-step part that would please mosh mutants new and old.

This is a very quick listen that offers a glimpse of what both Old Ghosts and Longest War have to offer, which is solid and nostalgic hardcore. The split covers both melodic and metallic aspects, which keeps the songs from running together, resulting in a well-matched split line-up. Go listen to Old Ghosts, Dead Hearts, Longest War, Achilles, and Chokehold.Â