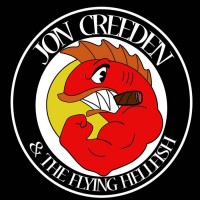 Jon Creeden and The Flying Hellfish

my fingers! My Brain! Records

Jon Creeden is primarily known for his acoustic material, which he has promoted on the road with a frequent touring schedule. Jon plays a raw folk influenced brand of punk rock that features a gruff voice that still manages to have a sugary aspect to it. My first experience with Jon was at a house show I was attending to support some pals doing acoustic sets. I had no real expectations of the other performers or of the show in general, besides enjoying a few beverages and hanging out with some friends on a warm summer evening. Jon played somewhere in the middle of the line-up and he immediately caught my attention, he had a strong voice and he sang catchy punk rock tunes that seemed to suit the mood of the party very well. It was a pretty relaxed house party vibe, needless to say quite a few adult beverages were consumed by everyone involved; so when I woke up the following morning with some new albums to check out, I was curious as to how much the liquid fun had influenced my enjoyment. To my pleasant surprise I found Jon Creeden's album Beards to be a very enjoyable listen. When I heard that Jon was doing material with a band, I was very curious, as my only issue with Beards was wondering what it would sound like as a full band effort.

With that being said, Jon Creeden & The Flying Hellfish Demo 2015 is pretty close to what I had been hoping for. It features the gritty but sweet vocals and catchy choruses that I enjoyed from Beards with the added intensity of drums and bass. They have re-recorded a couple of songs from Beards including "Miles Between", and "From One Coast To Another", which is the stand out track for me with this demo, although I found â€˜Nailbiterâ€™ to be a close second. The band is tight, and the songs are well put together, the main and only real drawback for me is the quality of the recording. Most of the demoâ€™s that I listen to are by hardcore bands, or punk rock bands that have a bit of a heavier edge to them, which I think makes a demo quality recording a bit easier to get away with. I would have gotten more out of this release had the production been a bit cleaner with a clearer focus on Jonâ€™s voice. Donâ€™t get me wrong, the quality isnâ€™t awful, it is reasonable demo quality, I was just expecting it to be a little bit more polished. The raw sound of the demo doesnâ€™t clash with what they are trying to do, and after all, the point of a demo is to get some attention before a future release, and they definitely caught my attention.

Jon Creeden & The Flying Hellfish have done a solid demo, it did help that I was already familiar with Jon Creedenâ€™s acoustic material, but I donâ€™t think that is necessary to get what is going on here. I would be very interested to hear a more polished full length in the future, and as far as demos go I think they did a solid job of getting their point across. I would recommend this to anyone who enjoys Hot Water Music, Against Me!, references to The Simpsons, or any of Jon Creedenâ€™s past acoustic material.Â

The Matches: Life Of A Match [7-inch]