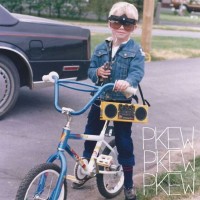 Sometimes, a punk rock album breaks down new walls, sets new standards for the genre, and becomes a timeless classic because it sets a new standard. Then there are albums that are like comfort food or seeing an old friend for the first time in years. They take you back to a place, or time, that youâ€™d forgotten you love and remind you of everything good that existed in that moment. The self-titled debut by Pkew Pkew Pkew falls into the latter category for me. The opening chords of â€œBloodclotâ€ transported me back to my late teens and early twenties, with its gang vocals and guitar hooks that get stuck in your head for days.

â€œAsshole Pandemicâ€ and â€œPrequel to Asshole Pandemicâ€ are filled with good natured humor about dealing with neighbors who arenâ€™t particularly fond of how loud you and your friends are, and pull no punches in making you aware of it. Aside from being topically relatable, because who hasnâ€™t had an insufferable neighbor in an apartment complex, the former of the two songs also succeeds at getting the lyrics, â€œwhyâ€™s this fucking dick gotta be such a cock,â€ stuck so far inside your head youâ€™ll find yourself singing them in your head whenever someone pisses you off.

On â€œMid 20â€™s Skateboarderâ€ the band delves into the downfalls of aging when they lament the fear of getting hurt while skateboarding in your mid-twenties, they do so with a sense of humor though. Other tracks like â€œLetâ€™s Order a Pizza,â€ reflect on the task of determining who is going to order the pizza when you and your friends are hanging out and how nobody wants to be the one charged with the task.

The longest track on the album, â€œGlory Days,â€ clocks in at just over three minutes. It opens with a slower roots rock influenced riff in the opening portion, perhaps as a tribute or comical send up to the Springsteen song of the same name. Once the song kicks in though, it becomes obvious the band is not celebrating people who dwell on their pasts as the band brings their voices together to remind that, â€œif those were your glory days, you must be real shitty now.â€ Which, when you think about, isnâ€™t so much a stab at looking back but reminding us that we have to make today as vital as the day before.

All in all, this band doesnâ€™t break any new ground musically within the pop-punk world and they certainly arenâ€™t going to drop anyoneâ€™s jaws with their lyrical abilities. But, every second of this album is filled with high energy vocals, great guitar hooks, and strong melodies. As much as I love bands that reinvent the punk genre, Iâ€™ll always welcome a band whose album reminds me of the albums that made me fall in love with it in the first place. This band and this release were a welcome surprise, and will likely find a home in my regular summer music rotation this year.

The Matches: Life Of A Match [7-inch]