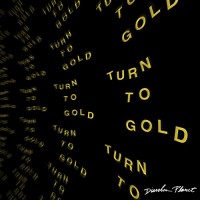 I need to preempt this by saying Iâ€™ve never seen Diarrhea Planet live. Iâ€™ve heard they are undeniably one of the best bands touring right now. Their last record Iâ€™m Rich Beyond Your Wildest Dreams, which I enjoyed, never captured the â€œlive energyâ€ Iâ€™d heard so much about. Unfortunately, Iâ€™m not sure Turn to Gold does either.

But it is extremely enjoyable. Hell, itâ€™d be hard to dislike an album with four battling guitarists. From the slow, instrumental buildup of the opener, itâ€™s clear these guitars have a lot to say. They act as the voice, the main characters. Thereâ€™s never a rush to get to a bridge or breakdown, but the emotion oozes out when they are loud and free, competitive yet supportive. They build on each other, like the Harlem Globetrotters of guitars. And man, when Diarrhea Planet hit, they blow you away.

Lyrically, there's not as much to say, clearly less of a priority. There are a few exceptions. â€œBob Dylanâ€™s Grandmaâ€ connects and anytime there are gang vocals, such as â€œLife Pass,â€ thereâ€™s reason to sing. For the most part, though, itâ€™s air guitars all the way. Everything comes together for the real winner, â€œAinâ€™t a Sin to Win.â€ Holy hell, thatâ€™s rock and roll. But it exposes what the album could use more of. Their last effort was a dirty rocker, lesser produced but possibly more effective. Does Turn to Gold take a step in the right direction? Itâ€™s cleaner and, overall, yeah sure. They find more time to both expand and control their sound but constantly feel like theyâ€™re waiting to let loose. When youâ€™ve named your band Diarrhea Planet neatness may not be necessary.

Diarrhea Planet are the real deal future of rock and roll. Who out there wouldnâ€™t like to see more four-guitar bands? Turn to Gold acts as a vehicle for playing these songs live, where theyâ€™re sure to take on another life. But the record will happily soundtrack your summer, especially if you're crusin' or chillin'.