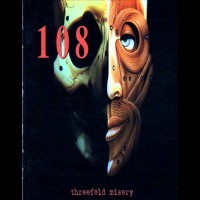 With Threefold Misery, weâ€™re getting the reissue treatment via SFU Records of a classic 108 full-length, originally released on Lost and Found. 108 were largely accepted as one of the biggest Krishna hardcore bands of the 1990s, and the recordâ€™s title itself is a nod to Khrishna teachings. Having begun playing shows again in the past few years, it seems that their old material has found relevance with an entirely new generation of hardcore music fans. And for good reason. 108 was, and is again, one of those few hardcore bands whose music is heavy but sophisticated and whose lyrics are at once ferocious and astute.

Threefold Misery is a great artifact of what made 108 such an influential band. The record moves at a furious pace and is indicative of the bandâ€™s progressive amalgamation of traditional hardcore sounds and the far more driving and groove-laden stylings of the Quicksand-led post-hardcore movement. Too many labels there. But it drives home the point that 108 were a very ingenuitive band. They cultivated a largely original sound in a genre that is often very derivative.

The strongest track on the reissue is â€œKiller of the Soul.â€ The guitarwork here is absolutely great as are the vocal patterns. The song creates a near-perfect balance of the aforementioned styles driven by an understated but melodic rhythm track. Lyrically the song also captures 108â€™s message of Krishna consciousness, veganism, and material disdain.

Similarly, â€œMantra Sixâ€ rocks with great passion and groove. The guitar leads are haunting and perfectly complement the rhythm tracks. Itâ€™s heavy without approaching ignorance and the lyrics are angry and insightful. Rob Fish also showcases his ability to draw out anger in both his spoken and screamed vocals. Again, the balance here only serves to improve the musicianship. The recording manages to really capture his energy and the listener canâ€™t help but to feel it too. â€œHow will you reap the harvest of your technology?â€ Indeed.

108 was a huge influence on a great many bands. If we want to trace the musical influences of Indecision, The Hope Conspiracy, and even their peers in Snapcase, weâ€™d absolutely have to include 108 in the conversation. Threefold Misery is a perfect introduction to the band too. Itâ€™s an utterly hardcore record that also brims with intellectual and spiritual dissent, not an easy feat. And while Threefold Misery isnâ€™t quite 108â€™s most celebrated release, Songs of Separation, it still rocks with all the angst and passion that made the band so important to so many people in the 1990s and even today.