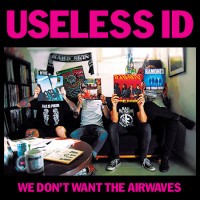 Useless ID are back with a new album and these four songs on Bandcamp are a promising preview. From Israel, Useless ID have been around a long time since the old Kung Fu Records samplers but they still make catchy enjoyable pop punk.


The first song, "We Don't Want the Airwaves" is a tribute to dead punk heroes, the Ramones. The main chorus, "Here's to all the pleasant dreamers and acid eaters" is pretty clever and the song ends with a lyrical shout out to sadly departed Teenage Bottlerocket member Brandon.

"Right Wing Fascist Killing Spree" is a political song about the band's pacifist and anarchist ideals in the face of an age of government repression in the world. The song is somber and acoustic sounding and is an interesting commentary on how the troubles of the age make a pacifist doubt their stance.

"State is Burning" is another political song about how they wish for the fall of the current world order. Who doesn't? Its similar to "Right Wing Fascist Killing Spree" but somewhat more aggressive and higher volume.

If these four tracks are an indication, Useless ID's new album will definitely be worth checking out.