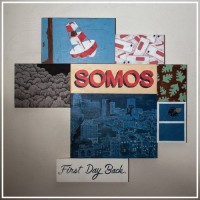 With their first full album since their 2014 release, Temple of Plenty, the Boston, MA indie punk band is back with their sophomore album, First Day Back. Since their 2014 debut release, Somos has also been featured on split albums with aggressive punk rockers, Have Mercy, and emo veterans, Sorority Noise, both of whom seem to have helped put Somos on the map in a very crowded musical sphere.

First of all, full disclosure, I have to admit that Temple of Plenty and the Somos/Have Mercy split were two of the albums I listened to the most in 2015, and I fully enjoyed the limitless potential I saw from Somosâ€™ in both of those records. And this album does not seem to disappoint. Tracks like â€œViolent Declineâ€ and â€œThorn in the Sideâ€ dawn back to Somosâ€™ melodic and aggressive background, which I fell in love with while listening to the bandâ€™s debut. Michael Fiorentino continues to have one of the finest voices in the indie punk scene as it beautifully accompanies the clean instrumentals these guys manage to bring song after song. Almost every song on the new album has its own unique vibe, but melds together perfectly to give the record a very nice flow from start to finish.

The only curveball that came with this album is how the tempo changes as you delve deeper into the track listing. Almost experimentally, Somos seemed to shy away from its more aggressive nature to include lighthearted melodies, full of soft guitar riffs and progressively more docile lyrics. â€œYou Wonâ€™t Stayâ€, a song that took me almost by surprise on my first listen-through of the album, sounds more like an early Hozier track than anything I wouldâ€™ve expected from a seemingly rugged punk band. The use of computer-synthesized drumbeats, rather than the impressive drumming of member Evan Deges, seems to drag the two-minute song out for an eternity and suggests the song was struck by a lot of modern synth pop influences. I can admit the sound the band created is very unique for a punk album in any form, but it is very well produced and Fiorentino does a fantastic job accommodating to the new style.

Despite the slight experimentation, I think the album is a very solid work from a band still in the early stages of building an identity in a very flooded punk scene. I believe this is a very solid addition to Somosâ€™ growing discography and believe this band has a large upside as they continue to grow and perform. I hope to see a lot from this group and would still ultimately recommend picking up First Day Back.