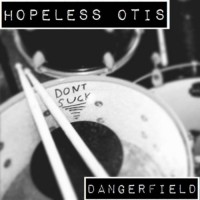 Somewhere near the intersection of pop punk, garage rock and, maybe, the alley of folk punk you can find Dangerfield, the newest release from NYC boys Hopeless Otis. Trapped within these ten tracks may not be the most accomplished music, but it is more than made up for with sly lyrics and perfectly imperfectly-timed vocals.

â€œBukowskiâ€ immediately sets the tone for the album. Joe on guitars craftily transitions his lead vocals between growling yells and something approaching actual singing, as Larry on bass supports him up with deep-throated back up vocals, half of which he doesnâ€™t even bother to keep in tune or even time right. But this just works in their favor, as sometimes showing more heart than a desire for precision and tightness is just the prescription you need.

The second track â€œWavesâ€ likely hits the biggest marks for folk punk, with a lengthy intro before rolling into a peppy yet low-key song that relies more on the lyrics and how they are sung than anything else. There is a point towards the end where Joe channels the spirit of Dead Milkmenâ€™s Rodney Anonymous, his voice just about cracking as he screams his head off.

â€œMy Fighting Weightâ€ is a faster paced, bubbly bass track that isnâ€™t hard to find enjoyable and â€œBrainsâ€ fills a track, being adequate but not memorable.

Track #5, â€œCool Guys,â€ is where things get weird. Suddenly this song and the next two sound like they come directly from an early-80s punk album, both stylistically and recording/production-wise. This is a wild difference from the first four tracks and caught me off-guard so strongly that, for the first few listens, I automatically double-checked that I didnâ€™t actually skip to a different album altogether.

Then, as suddenly as everything changed, it circles around again for the final three tracks, even though they too sound like a slightly different group of songs than the previous two sets. â€œDonâ€™t Get Tired,â€ the penultimate song of the album, is one that can stick in your head for days. Front to back it is likely the best of the album.

I think the most disconcerting aspect of the album is that you get the feeling that it should be three separate singles/EPs. This despite the specs that state all songs were recorded, mixed, and mastered by the same person at the same studio. Maybe the songs were written at different stages of the bandâ€™s career, and this is a reflection of that? Who can tell, unless Hopeless Otis spills the beans.

This doesnâ€™t in any way diminish how enjoyable the album is front to back. And it is definitely a fun album, one worth parting with some of your hard-earned money for. Not only does Hopeless Otis give you exciting songs bolstered by memorable lyrics and vocals but, in a twist on the smash-and-grab style normally associated with pop punk, five of the songs on the album crack the four-minute mark and beyond. Yet there are enough transitions and unique sections that you donâ€™t feel that these lengthier tracks drag on. In fact, they may actually be the better ones on the album.