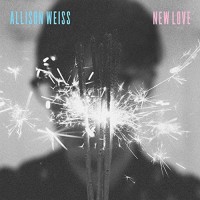 Allison Weiss lays her cards out on the table on the opening track of her album, "New Love". Her distinctive voice is a bit lower on the register than her contemporaries. She's got the voice for rock music, but this is not a rock album. This is an 80s pop album written in 2015.

"Who We Are" gives the listener a run down of what's to come on the album. The song is a lush dance tune full of synthesizers, soaring choruses, and a driving drum beat. "Golden Coast" opens with an in your face synthesizer lead before pulling back for the verses. Thereâ€™s a sense of excitement that makes you want to hop in your car and take off and find what youâ€™re looking for out of life. The songs speaks of heading home. That little spot in the world thatâ€™s yours. Filled with what makes you happy.

"Back To Meâ€ is the best Blondie song Debbie Harry never wrote. By now, youâ€™re halfway through the album and thereâ€™s no way youâ€™re not finishing the album. Youâ€™ve got a smile on your face and goosebumps on your arms. (Maybe thatâ€™s just me) My two favorite songs are the combination of track nine and ten. â€œMotorbikeâ€ is a straight forward almost Ramones-esque song that is more akin to her earlier work, but strangely still fits on this album. Allison really shines on songs like this when she just can belt out the lines. Itâ€™s a simple song, but itâ€™s a showcase of how great a singer she is.

â€œMotorbikeâ€ previously was about getting away from someone whoâ€™s been bumming you out and clearing your head. â€œNew Loveâ€ finds Allison reminiscing over said previous love. The transition musically is so drastic it makes the lyrical content that much more intense.


The album ends as it started. A mostly acoustic reserved song in, "The Same". It wraps the album up in a nice little bow with the line, "We're all a little bit the same", being repeated. It's a vulnerable album that makes you feel human. Music can have as much or little as an effect on your emotions as you want it to. Sometimes you want to dance, sometimes you want to cry. This album suggests that maybe you can do both, at the same time.Â