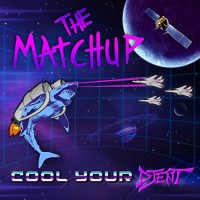 Building on the growing genre of acoustic punk, Montreal-based acoustic duo The Matchup returns with the six-song EP â€˜Cool Your Djent.â€™ While the album seems to satisfy when it is on, after it is over it fails to leave a lasting impression.

Let me start by stating unequivocally that The Matchup play some skilled, tight music. Rat Luv and Burger Barrington (likely not their real names, Iâ€™m sure) know how to wale on their instruments, and play together with such aplomb that it can be mesmerizing to listen to. However, this is somewhat lessened by several instances of post-production effects and fiddling which, in a way, diminish the raw acoustic sound.

Another questionable aspect which is a make or break for listeners are the lead vocals, which I cannot ID who is responsible for. Gravelly and deep, they seem to work most of the time, but there are points where they seem to be a bit too aggressive for the music and, to be honest, occasionally came across as silly and comical because of that poor fit. There are times when I laughed at the vocals. I felt bad about it, but there it is...

As a whole, the songs are neat but a bit forgettable. One ballad in particular, â€œ20 Minutes,â€ is clearly meant to be a rousing testament to the power of music in a personâ€™s life but ended up coming off a bit weak and contrived. â€œExit the Vizard,â€ the final track, slowly devolves into synth music which sounds very 16-bit video game-era, which I found to be a clever and amusing finale for the album.

Sometime the choice of lyrics is questionable, as well. One track had barely any rhyming verses. Although this can work if done right, it doesnâ€™t here. The chorus for â€œMaritime Girlâ€ just doesnâ€™t work. At all.

Acoustic punk is a big thing now and, when done right, it can be excellent. Iâ€™m sure there are a lot of potential fans out there for this band who will love what they do but, for me, The Matchup isnâ€™t there yet. Thereâ€™s a big difference between acoustic punk and punks playing acoustic, and I believe The Matchup fall squarely into the second category. Take the lead vocalist of any chart-topping, popular acoustic act- say Marcus Mumford of Mumford and Suns- and put his vocals over any The Matchup song and no one would know the difference. There just isn't anything unique here for me to grab on to.

If I had one piece of advice, I would say ditch the occasional stomp or kick drum to keep the beat, and add a full-time drummer. Not only will it help to preserve the aggression and potential power of the phenomenal guitars but, in my opinion, may also alleviate the sometimes questionability of the lead vocals and help to root them in the music instead.