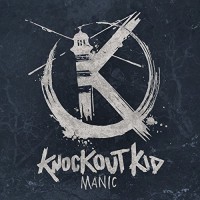 Knockout Kidâ€™s foray onto the spotlight of the hardcore, pop-punk scene has been a slow burn. The band spent the last half century canvasing Chicago bars, pushing out EPs and even flipping through singers.

But its long flight under the radar isnâ€™t from a lack of talent. Placed next to similar, successful acts- think Chunk! No, Captain Chunk! or Four Years Strong- Knockout Kid holds water. Their musicianship is always top notch. And now it appears the band is ready for a break out. Methodically gaining traction, the quintet spent more than a year working on their first album, ManicÂ¸ which dropped in February. Pardon the pun, but itâ€™s nothing short of a knockout.

From start to finish, the album is worth your time. â€œStay Litâ€ is an appropriate first track, with an aggressive guitar riff preceding both the first and second verse. Itâ€™s paced by a blistering beat from start to finish. Lyrics like â€œI scream on and on, on a regular basis. How long do you think I can take this?â€ personify the albumâ€™s examination of its titleâ€™s emotion.

The songs â€œGoing, Going, Goneâ€ and â€œWhat Are You Afraid to Sayâ€ also bat near the top of the album. The former of the two features the delightful juxtaposition of the aggressive, gruff vocals from Wade Hunt and a poppy melody. Itâ€™s capped by a big finish that plays well into â€œWhat Are You Afraid To Say,â€ a delightfully melodramatic track with the lyrics â€œblank pages will read how we once were, blank faces will be the remedy our cure.â€ You can go ahead and snap your fingers if youâ€™d like.

The song â€œJurassic Park After Dark,â€ sounds playful from the title and melody, but is lyrically dark and representative of the album. The band released it as a single and itâ€™s turned into Manicâ€™s most popular tune on streaming sites. Featuring Kid Libertyâ€™s Trey Sexton, the song is aggressive, addicting and absolutely worth a download.

A few other highlights from the album; fans of bands like A Day To Remember will dig â€œHandbook for the Recently Deceased.â€ â€œAtlas Absolved and â€œKnife Fight in a Phone Boothâ€ are two of the heavier tunes. â€œHouse on a Hillâ€ has kindaâ€™ a mid-2000s post-hardcore sound that inspires vivid imagery. â€œLegend of the Bare Knuckle Bronsonâ€ swings back and forth between heavy to poppy, with head banging versus and a bouncy chorus. A random, yet intriguing acoustic-like finale really helps it stand out.

So, what are the albumâ€™s strengths? Itâ€™s versatile, interesting and well-paced. If youâ€™re looking for a solid blend of pop-punk, hardcore, and maybe a little metal, youâ€™ve found that right album. The production quality is excellent and the vocals are rarely muddled by the instruments. Maybe most importantly, you can tell significant thought went into each song. There are no throwaways; no skips. The album is complete from track one to track twelve with something distinctive about each tune.

In an interview with the YouTube page theRyMan182, the band talks about the overarching theme of manic depression and how it plays into the album. As they say, â€œthe first six songs are about being manic and the next six are the depressive part to complete the manic depression theme.â€ Itâ€™s an idea that gets examined at nauseam by similar bands. You can draw pop-punk or post-hardcore groups out of a hat and know well theyâ€™ve written about the topic. But Knockout Kid approaches the disorder with a fresh point of view. Each song focuses on a separate element, whether its addiction, anxiety or romance, ultimately presenting manic depression in a very understandable way.

But this isnâ€™t cash grab or ploy to sucker hormone-filled young people into a sappy â€œwoes is meâ€ sort of album. Itâ€™s candid, creative and relatable. It stays true to its fore-punkers while providing a unique take on the genre. Knockout Kid nails its first impression, even if it took years to make.

The Matchup: Cool Your Djent

The Garden: Live in Philadelphia