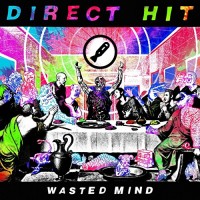 When it comes to â€œaggro pop punkâ€ act Direct Hit! one thing is for sure -- each of their full-lengths are very different from one another. 2010â€™s Domesplitter, though great, is Â fairly middle of the road, while 2013â€™s Brainless God is much darker sonically and especially lyrically. And now for Wasted Mind, their Fat Wreck Chords debut, they have gone in a much sonically brighter direction. Instead of lyrics about monsters or Satan and cults in the white robes or the apocalypse, this time around the band has chosen drugs as the overall theme for their third full-length (or fourth full-length if you are also counting the More Of The Same: Satanic Singles).

Wasted Mind starts out sort of the same way as Brainless God. The intro track titled â€œA Message To Young Peopleâ€ is a fuzzy recording of an announcer explaining that those over forty years of age probably should not listen any further than they already have. Once the announcerâ€™s voice fades out Direct Hit!â€™s famous â€œFUCK YOU! GET PUMPED!â€ is shouted and is immediately followed up by the gigantic opening chords of â€œArtificial Confidence.â€ Right off the bat, you can hear that Direct Hit! has taken a different direction with this album. â€œArtificial Confidenceâ€ is one of the more anthemic songs you hear from the band thus far in their career. Once the guitars stop letting the chords ring out, the song speeds up into what will most certainly be circle pit-inducing verses that just donâ€™t let up. Nick Woodsâ€™s vocals are also noticeably stronger. They are as dynamic as ever and he is able to change from (somewhat) calm and melodic to furious and soaring very smoothly. What is also very cool about this song and others through out the album is that it isnâ€™t just two guitars, bass and drums. In this track specifically the band added bells, a synthesizer, and even violins to compliment and accent the pretty abrupt changes that occur.

â€œWas It The Acid?â€ is also another example of Wasted Mindâ€™s lighter sound, however it is much more reminiscent of Direct Hit!â€™s aggressive pop punk tunes that made them stand out on Domesplitter and Brainless God -- the tracks â€œSatan Saysâ€ and â€œBack To The Towerâ€ come to mind. It is filled to the brim with hard-hitting, palm-muted power chords, but to break things up a bit Devon Kay comes in with these licks that are a major contributor to the albumâ€™s more upbeat sound as a whole.

One of the pleasantly unexpected additions Direct Hit! made on Brainless God was their exploration of mixing hardcore and pop punk together with the song â€œWeâ€™re Fuckedâ€ and later with their cover of The Priceduifkesâ€™s â€œIâ€™m Ainâ€™t Dreaming of A White Christmas.â€ Well the band goes a bit deeper into this experiment with the songs â€œDo The Sickâ€ and â€œPaid In Brains.â€ You can tell the members really pushed themselves with â€œDo The Sick.â€ It isnâ€™t anything Direct Hit! fans have really heard from them before. The instrumentation is a pretty standard pop punk chord progression, but Nick Woodsâ€™s screaming is shrill to the point where you think he could start coughing up blood and his ability to swiftly transition into the more melodic choruses is pretty remarkable. Would anyone expect there to be an interlude consisting of an organ solo and a piano solo that follows? Then again would anyone have guessed that a horn section would have made it into â€œPaid In Brains?â€ I donâ€™t think so, but all these added instruments work seamlessly.

In a time where mediocre pop punk bands are a dime a dozen, Direct Hit! still manages to be at the forefront of what can be done with the genre. All of their full-lengths are very distinguishable from one another and they have managed to keep that notion consistent with Wasted Mind. Direct Hit!â€™s ability to branch out, yet still remain true to their angry pop punk sound and their wild and "out there" lyrics are what make them so unique. It is what makes Wasted Mind such a great album.Â